It is with great personal sadness that I note the passing of Ron Miller at the age of 85. Ronald William Miller was an American businessman and former professional American football player. Married to Diane Disney Miller, Walt Disney's eldest daughter, he worked for his father-in-law on numerous film projects and later became President and CEO of The Walt Disney Company from 1978 until 1984, when he was ousted following an internal power struggle that saw the company pass into the control of Michael Eisner, Frank Wells and Jeffrey Katzenberg supported by Walt's nephew Roy E. Disney.

Ron Miller's achievements, during the difficult years following Walt's death were hugely significant and have yet to received their due credit. As his father-in-law had done before him, he pushed the Company to expand and explore, creating, in 1983, the Touchstone label (with its first stand-out hit, Splash!) and launching the Disney Channel. He was an innovator (although, again, unacknowledged), experimenting in early computer animation in Tron (1982); funding an unlikely collaborator, the renegade Tim Burton, for stop-motion animation shorts Vincent (1982) and Frankenweenie (1984); and sowing the seeds for several future hit projects, among them Who Framed Roger Rabbit? (1988).

Following the 1984 company coup, Ron and Diane left Hollywood and settled in Nappa Valley where they had already established the now internationally successful Silverado Vineyards.

Ron was a gentlemanly giant, a man of great personal charm and graciousness whose company I enjoyed on several occasions. The first in the late '80s – in company with my friends Richard Holliss and his wife, Chris – on a visit to the Miller's then home in Hollywood and later, on various visits to San Francisco. He will be remembered (apart from his valiant attempts to reinvigorate the Disney studio following Walt's death) for his service to the Disney legacy, tirelessly supporting Diane's various projects devoted to her father's memory, including the documentary film, Walt: The Man Behind the Myth (2001) and the visionary project, The Walt Disney Family Museum created in 2009 in San Francisco where the Millers had a penthouse apartment overlooking the Bay. Following Diane's tragic death in 2013, Ron became president of the Museum's board of directors.

He had agreed to write an introduction to a book of Walt Disney's letters that I am currently editing and I am saddened that this will, now, never be the case.

I am pictured below with Diane and Ron in 2001 at the premiere of Walt: The Man Behind the Myth, in which I made a cameo appearance. 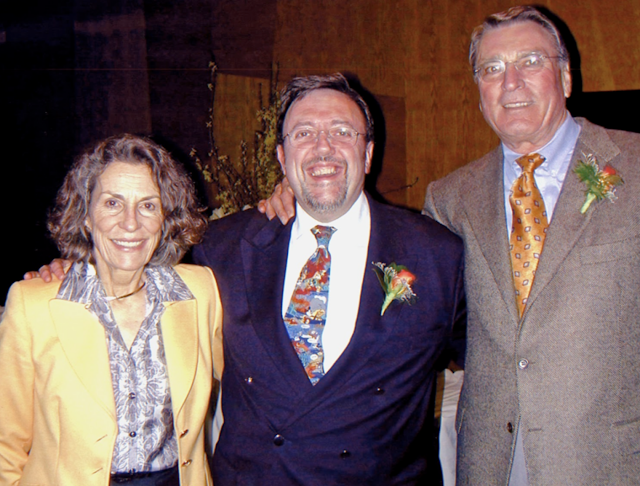