Much-worn and much-loved, it reminds me – every time I check the time – of a memorable visit to Walt Disney World...

A short TV documentary on the new Disney Winnie the Pooh film in which I make a cameo appearance...

See also my posts on Mark Henn and Andreas Deja.

Let your conscience be your guide and keep an eye on the time...

Many thanks to Michael Goldberg for this addition to my Disneyana collection.

Snow White and the Seven Dwarfs clock with an inscription to Brian Sibley from Adriana Caselotti, the voice of Snow White, dated 1988.

MARY POPPINS AND THE CAPTAIN 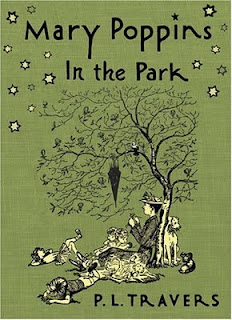 So, I was telling about how I wrote what might have been a film sequel to Mary Poppins...

Every now and again, during the process, there were stray conversations about who might play Barney – the ice-cream seller in the park who was to replace Bert as the leading male character in the film.

One such exchange was quintessentially ‘Hollywood’, by which I mean that it was so typical of Moviedom that it may easily have betokened a genuine cast-iron idea or nothing more than a wild and passing whim...

Anyway, this is what happened...

I'm taken to lunch by a Studio Executive at a ritzy restaurant on Rodeo Drive and, during the meal, I am suddenly confronted with a totally unexpected question:

“So," begins the Exec, "is it essential for Barney to be ‘Caucasian’?”

“I mean, does he have to be white?” he translates.

My failure to instantly respond is, of course, not because I don’t know the meaning of the word 'Caucasian', but simply because I can’t imagine why I am being asked…

For one thing, black people in Edwardian London were far and few between and whilst it was just possible, perhaps, to find a black footman serving in some big household,meeting a black ice-cream seller in a London park would have been an extremely unlikely occurrence.

And – apart from anything else – Barney is supposed to pass for Dick Van Dyke's younger brother!

Why do they want to know, I ask.

"Well,” comes the reply, “it just so happens that Michael is very keen to work with the Studio on a project..."

"Yes!" responds the Exec, as if dealing with a complete idiot, "Michael JACKSON! Having made Captain Eo for Disneyland, he's now a part of the Disney family..."

Exec is not amused. He becomes emphatic: "Look! He sings! He dances! He'd be PERFECT!"

I stop laughing: he's in earnest! 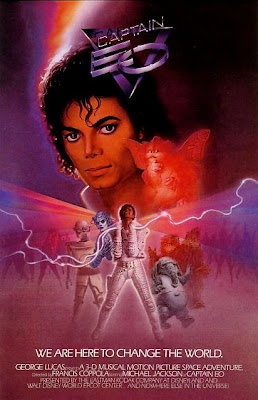 As it turned out, Mary Poppins never did come back - not, at least, on film - but if she had, then it's anyone's guess whether we might also we have seen Captain Eo selling strawberry ices in Cherry Tree Lane…
Posted by Brian Sibley at 00:01 4 comments: