This is the first of an occasional series featuring Disney magnets from my collection, beginning with a set of five marking the opening of EuroDisney (now Disneyland Paris Resort) in 1992 and obtained by sending coupons collected from packets of Findus frozen foods.

Note: None of them feature M Mouse Esq. 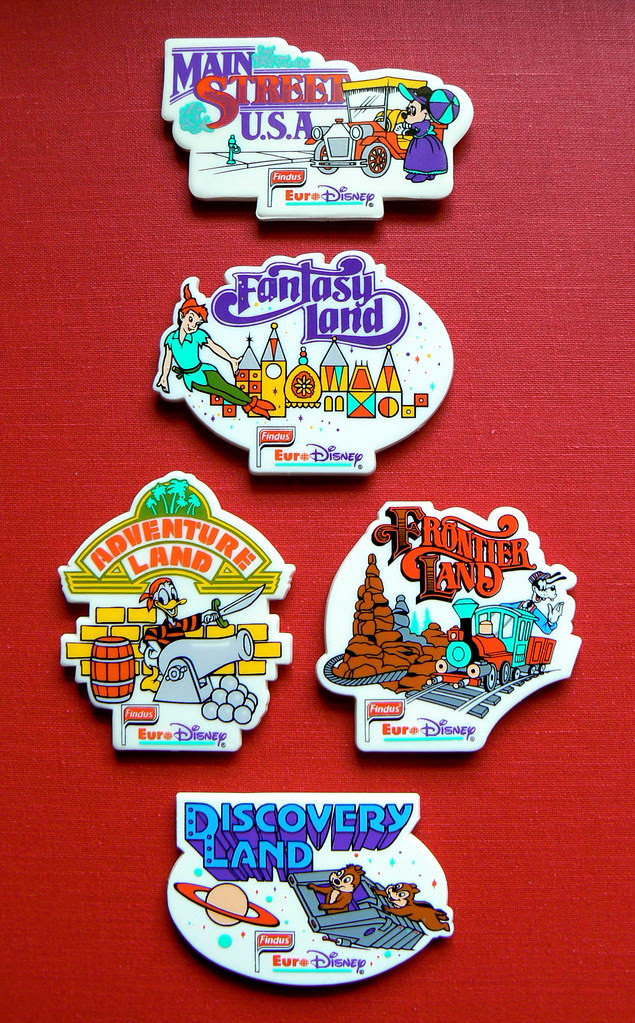 "WHEN I GET SMITTEN, I STAY SMUT!"

Despite living on the wrong side of the Atlantic, I've been smitten by Charlie McCarthy for years: I love the radio shows and while others may mock the idea of ventriloquism on the wireless, Edgar Bergen proved with Master McCarthy and Mortimer Snerd - as did his British counterpart, Peter Brough, with his equally successful radio shows featuring Archie Andrews - that any vent act (seen or only heard) succeeds solely because of the character and personality of the doll. 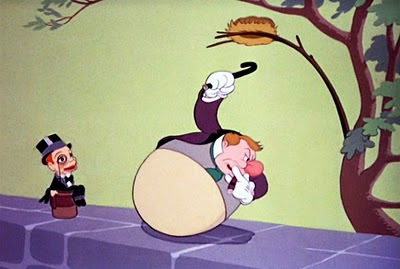 Photo: Michael Sporn Animation Inc
In 1947, Charlie - along with Mortimer and supported by Edgar Bergen - co-hosted Disney's Fun and Fancy Free, entertaining little Luana Patten with the saga of 'Mickey and the Beanstalk'... 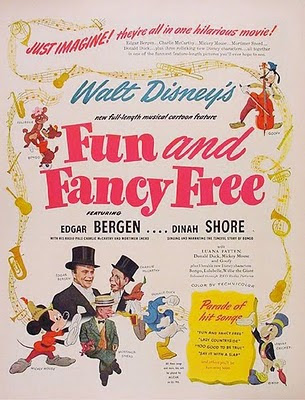 Then, three years later in 1950, Edgar and Charlie were on hand to help Walt launch his first-ever TV show, One Hour in Wonderland, that was a thinly-veiled promotion for the upcoming release of Alice in Wonderland. Charlie chatted with Kathryn Beaumont (dressed in Alice costume) and, here, with Walt's daughters Sharon (left) and Diane (centre)... 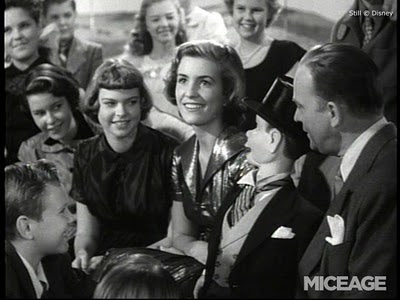 Photo: MiceAge
All of the above is a justification for reproducing a couple of items from my collection: an autographed photo of the suave, top-hatted duo... 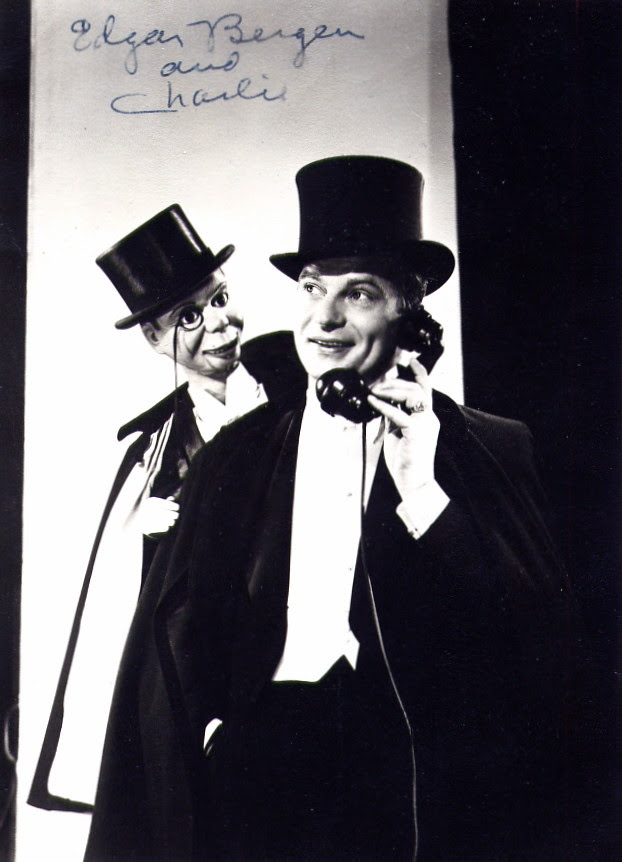 And One Simple Simoleon: a piece of Charlie McCarthy Mazuma in the form of a One Smacker bill ("Money talks but this doesn't even whisper") that was given away at their live shows. Take a close look at the detail on the note to catch all the witty McCarthyisms...

Posted by Brian Sibley at 14:01 No comments:

I'd like to share a couple of mementos from my long association with Marc Davis, with whom I had the privilege of spending time in Los Angeles (his wife, Alice, was - and I'm sure still is - a fabulous cook!) and London and who contributed to several of my BBC radio series on Disney.

The first is a self-portrait...

The second is a, literal, 'thumbnail' history of Marc's career designed by the brilliant young animator Pres Romanillos (who was taken from us far too early) as a place-setting for a memorable evening in 1999 (the year before Marc's death) when a number of his friends met for dinner with Marc and Alice, at the El Conquistador Mexican restaurant on Sunset Boulevard.

I salvaged two copies at the end of the meal: one was signed to me by Marc and Pres but was subsequently 'lost' by the picture framer to whom I had taken it for framing - so, if you're ever offered a double-signed copy, you'll know the provenance!

Before his death, Pres Romanillos told me that he had presented the original of the drawing to Alice Davis and that it now hangs in their house in Marc's studio.

Marc Frasier Davis (1913–2000) worked for Disney as an artist, animator and designer and was one of Disney's 'Nine Old Men'.
Characters that Davis was responsible for designing or animating include the young Bambi, Thumper and Flower in Bambi (1942), Brer Rabbit in Song of the South (1946), the eponymous heroines of Cinderella (1950) and Alice in Wonderland (1951), Tinker Bell in Peter Pan (1953), Maleficent and the Princess Aurora in Sleeping Beauty (1959) and Cruella De Vil in 101 Dalmatians (1961). Davis also designed the characters for a number of rides and shows in the Disney parks, among them Disneyland's The Enchanted Tiki Room, Great Moments with Mr. Lincoln, Carousel of Progress, Pirates of the Caribbean, The Jungle Cruise, America Sings, Haunted Mansion, It's a Small World and the Country Bear Jamboree.

It's almost forty years ago now, but I remember the conversation as if it were yesterday.

It was an awful lot of money.

I was just twenty years old and had not long been seriously bitten by the Disney-bug.

My fascination with Disney movies had been suddenly intensified when I borrowed R D Feild's book, The Art of Walt Disney from my local library. Here was someone who, unlike my Mum, didn't think of 'cartoons' as the kind of kid's stuff you ought to have grown out of by the time your voice breaks.

I wanted a copy of The Art of Walt Disney more than anything else in the world and began scouring the second-hand bookshops, which is how I stumbled on Fred Zentner. He later became The Cinema Bookshop in London’s Great Russell Street, but then he sold film books, stills, posters and other gems - including a copy of The Art of Walt Disney - from the basement of The Atlantis Bookshop, in Museum Street, just round the corner from the British Museum. Once found, I began, bit by bit, buying up Fred's stock of Disneyana.

Then came the day when he placed into my hands a copy of The Story of Walt Disney as told by Walt's daughter, Diane Disney Miller, to Pete Martin. 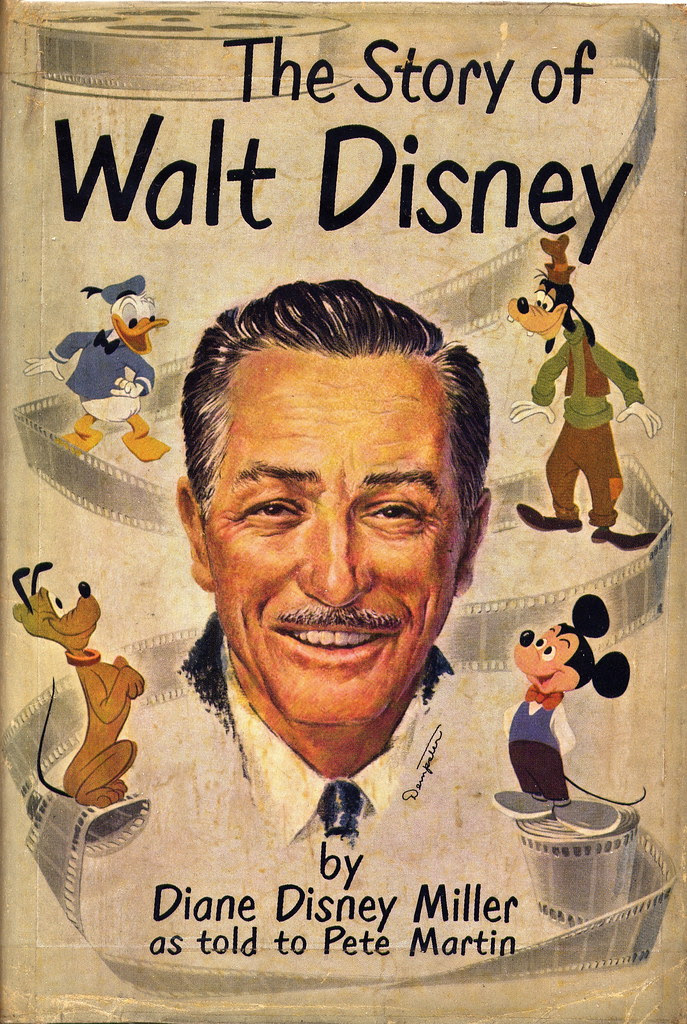 It still had its original dust-wrapper with a design by Disney studio artist Al Dempster and, what's more, it was ----- SIGNED!

On the half-title page, in green biro, with that distinctive bold handwriting was the inscription: 'Best Wishes Walt Disney'... 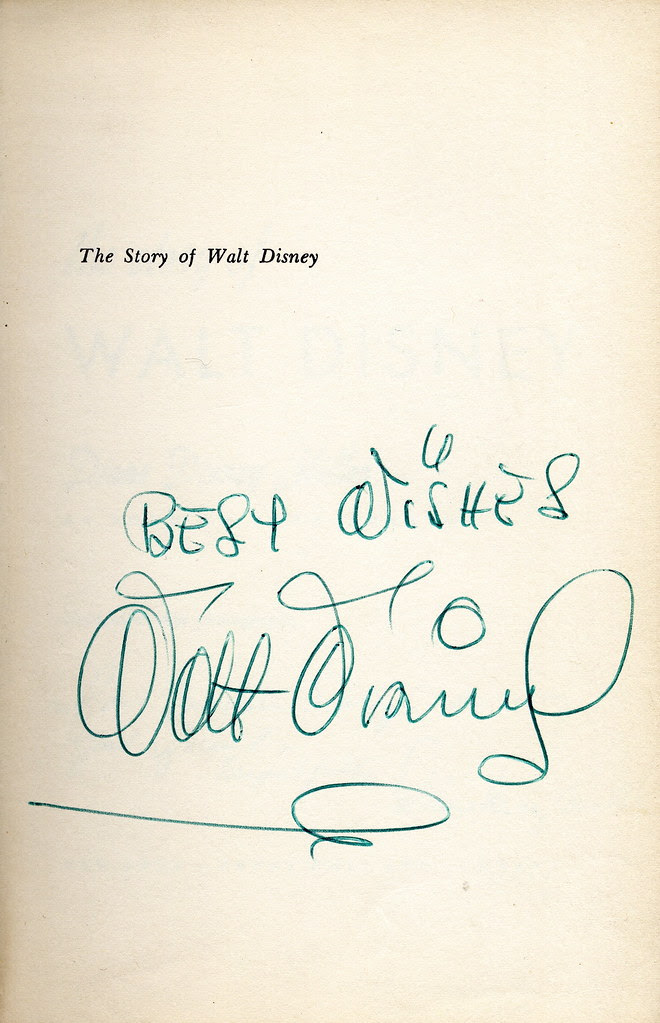 It was his very signature - including the little circle over the 'i' in 'Disney' that I emulated in my own signature. This man - whom I had never met but who exercised an obsessive fascination over me - had held this book, opened it and inscribed his name inside.

Forty pounds for a book? My mother would go bananas! Besides, I couldn't afford it. I didn't have forty pounds. I didn't know when I ever would have forty pounds. But, right there and then, I desired that book with a passion that, call me eccentric if you will, I have scarcely felt about anything since.

It was way beyond my meager means. Then Fred Zentner showed himself to be a man who understood the full anguish of desire, because he made me an offer. If I paid him ten pounds a month for the next four months, he would keep the book for me until I had paid the full forty. Month by month, I made my pilgrimage to The Atlantis Bookshop, looked at the swirling green signature and paid another ten pounds. Then, one day, it was finally mine!

Fast-forward thirteen years to 1982 I am standing in the Archive at the Walt Disney Studio in Burbank, California, talking to Archivist, Dave Smith. I am there researching a television documentary about EPCOT and I mention, in conversation, that the prize of my Disney collection is an autographed copy of The Story of Walt Disney.

Dave Smith laughs and asks a question that almost brings the universe crashing down around my ears.

“Are you sure it's actually signed by Walt Disney?”

“Of course! It says so, in green ballpoint: ‘Best Wishes Walt Disney’!”

“That may be,” he replies, “but many people at the Studio - some of them distinguished animators - signed books and pictures on Disney's behalf.”

I look stunned. But, Dave goes on: “The Disney signatures by these other artists are more like the famous logo signature that appears on Disney movies and merchandise. Walt's personal signature, however, is quite distinctive. Would you like to see a GENUINE Disney signature?'

Nothing could be simpler: within seconds I could know whether or not I owned the real thing. Or, I could leave things as they were. Except, of course, that now I couldn't. Dave Smith had sowed the seed of doubt...

I hesitate for no more than a second. “OK, yes, let's see a GENUINE Disney autograph…”

Dave in fact showed me a whole series of genuine Walt Disney signatures in an article he had written in 1981 for Manuscripts, the journal of The Manuscript Society. You can read the full Dave Smith Manuscript article at the end of this post.

When, a few years later, I got to know Diane Disney Miller, I asked her about the book and she told me that her father used to sign copies for sale in the bookshop at Disneyland, which was very probably where my copy had originally been purchased.

She also explained that whilst The Story of Walt Disney carried her name as author (and, indeed, included several of her own reminiscences) it had been Walt himself who had collaborated directly with Pete Martin on the book. However, her father had decided that it would be better for his life-story to be presented as if told by his daughter partly because he felt that to tell it himself might appear arrogant, and partly because he wanted the recently married Diane to earn some money.

1998, decade and a half on, I found myself in San Francisco working with Diane on a BBC radio series about her father. 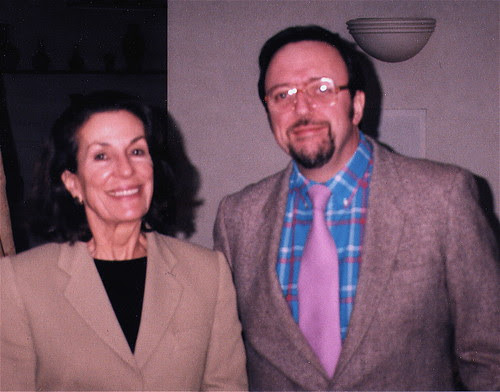 On this occasion, I had carried the treasured volume with me and I asked her to add her signature to the book’s title page.
Diane was modestly reluctant - since, as she had already told me, she didn’t consider herself in any sense the book’s ‘author’. However, she eventually relented and graciously inscribed the book: “For Brian Sibley - a very good friend - Respectfully, Diane Disney Miller”... 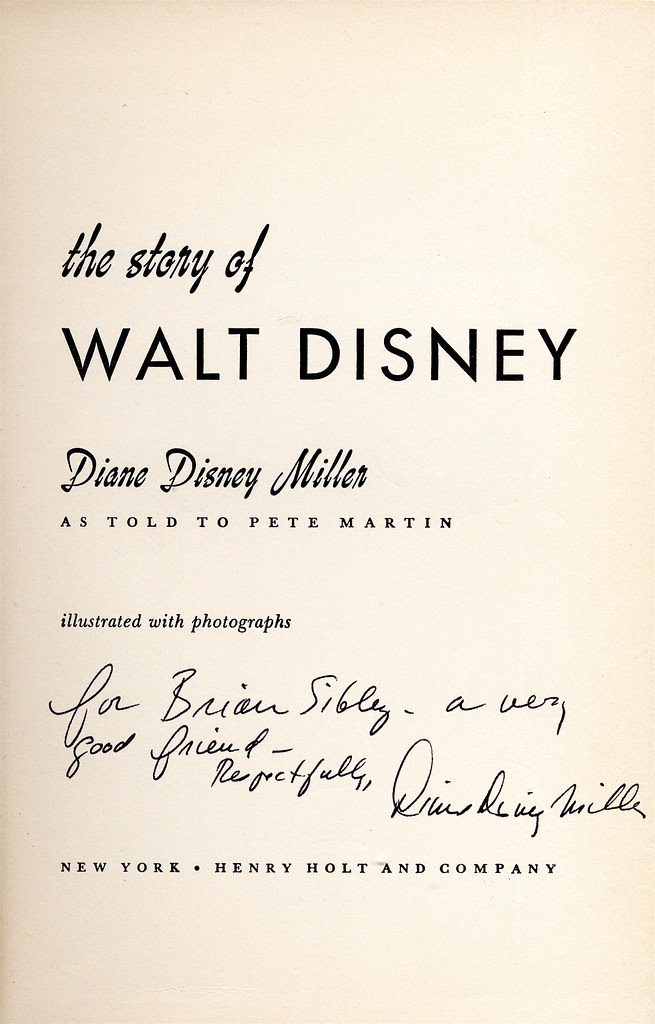 A few more years down the road, 2001, I attended the Los Angeles premiere of the documentary Walt Disney: The Man Behind the Myth in which I appeared as an interviewee.

By this time, I had acquired a British edition of what was now called Walt Disney - An Intimate Biography published by Odhams Press (London) in 1958... 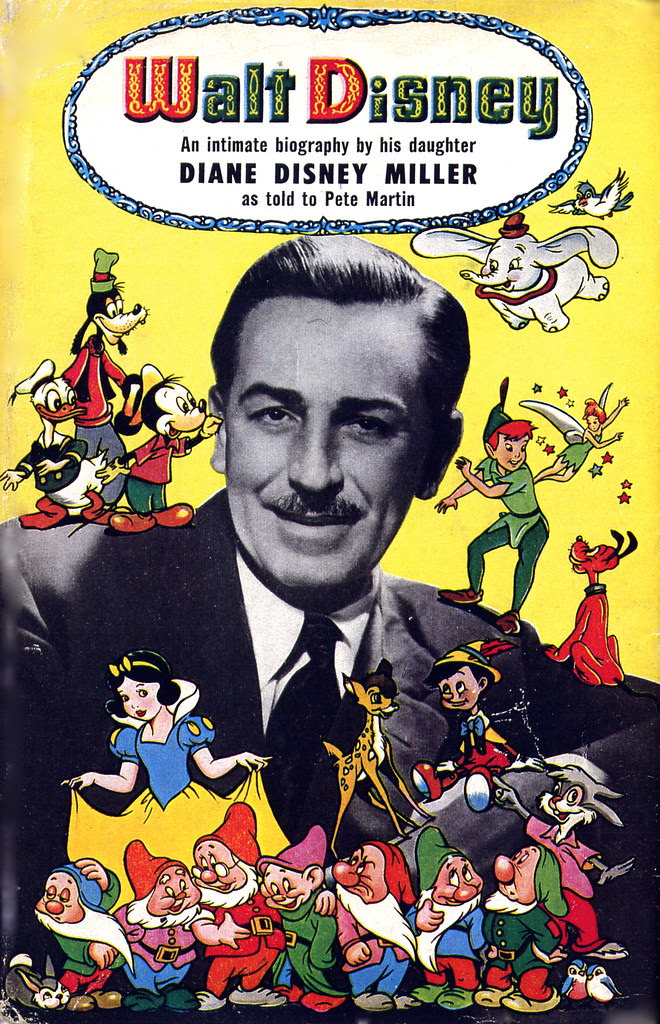 At the post-screening party, chatting with Diane and her husband Ron, I produced this volume and asked whether the book’s Non-Author would oblige with another inscription!

Appreciating the joke, she unhesitatingly agreed...

Beneath the printed sub-title - ‘An intimate biography by his daughter, DIANE DISNEY MILLER, as told to Pete Martin’ - she wrote: “Actually, Brian - we know better, don’t we? Warmest, warmest regards, Diane.” 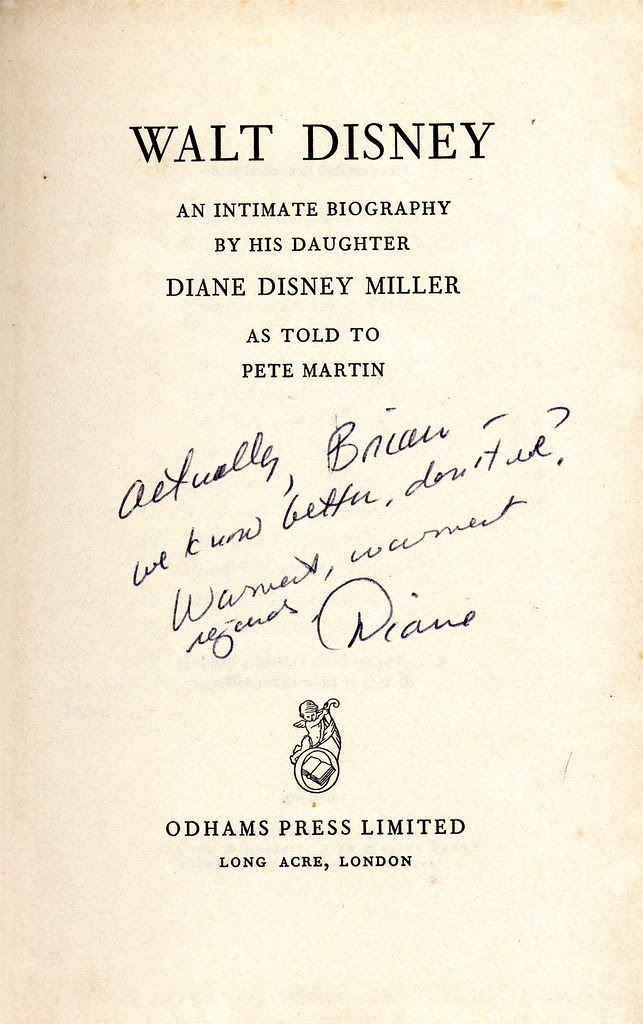 Nowadays, the autograph business is big business: copies of the recent reprint of The Story of Walt Disney with Diane's signature sell for several hundred dollars and someone, in a recent American auction, paid over three thousand dollars for a copy of the original edition signed (also in green ballpoint!) by Walt.

So, all in all, I think that original - and seemingly astronomical - forty pounds of mine was money incredibly well spent!

It is not, however, for any financial value that I treasure these volumes, but for the even more valuable memories and associations that they hold…

***
Here is the article, 'The Most Recognizable Signature in the World' by David R Smith in the Manuscript Society journal, Manuscripts, Vol XXXIII No. 2, Spring 1981 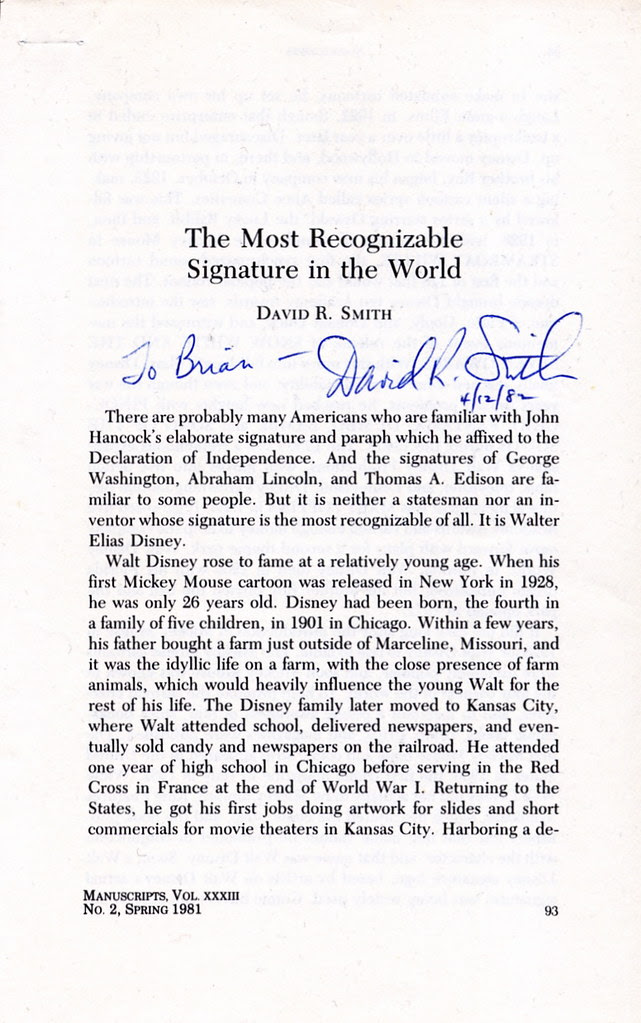 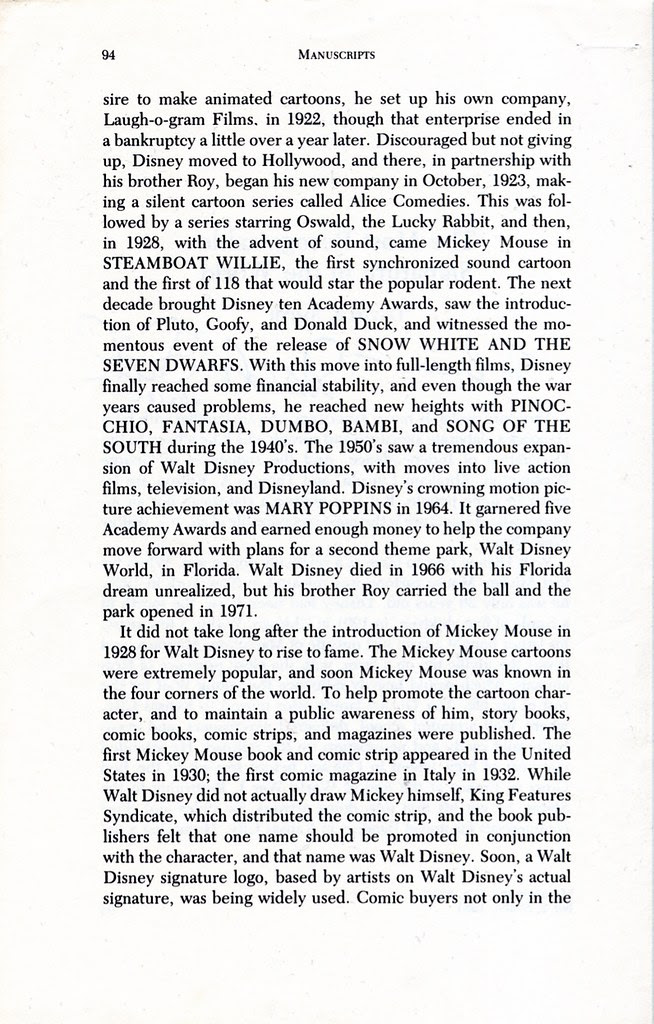 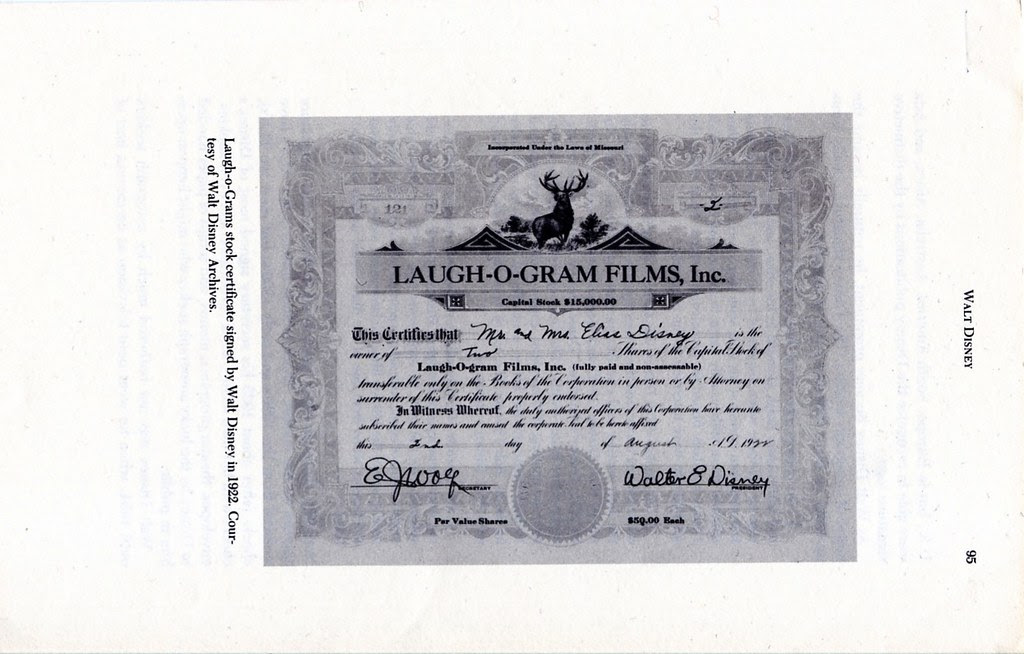 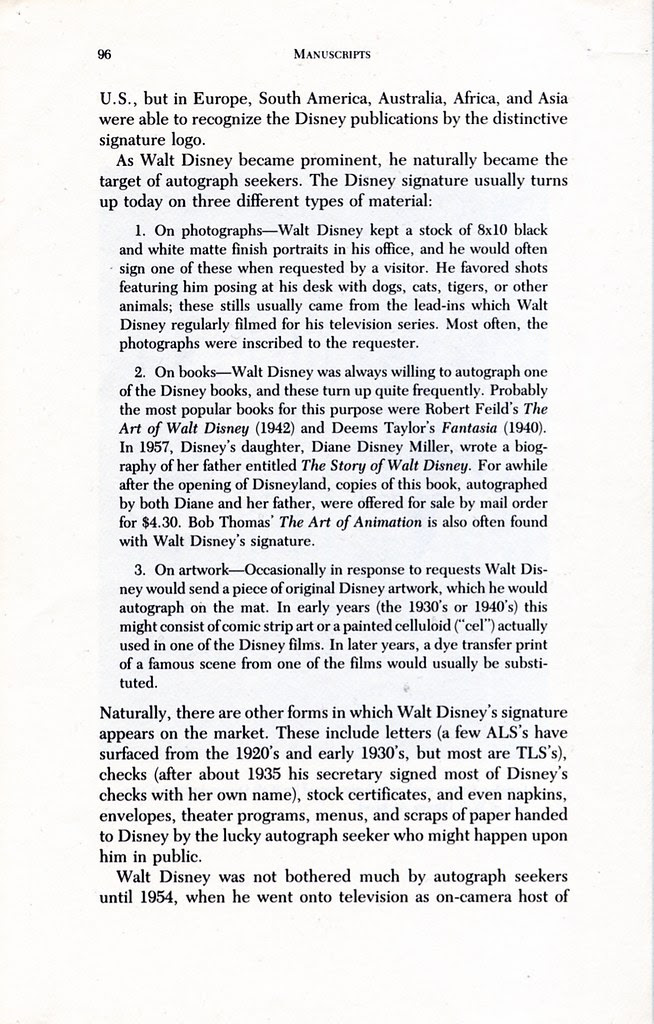 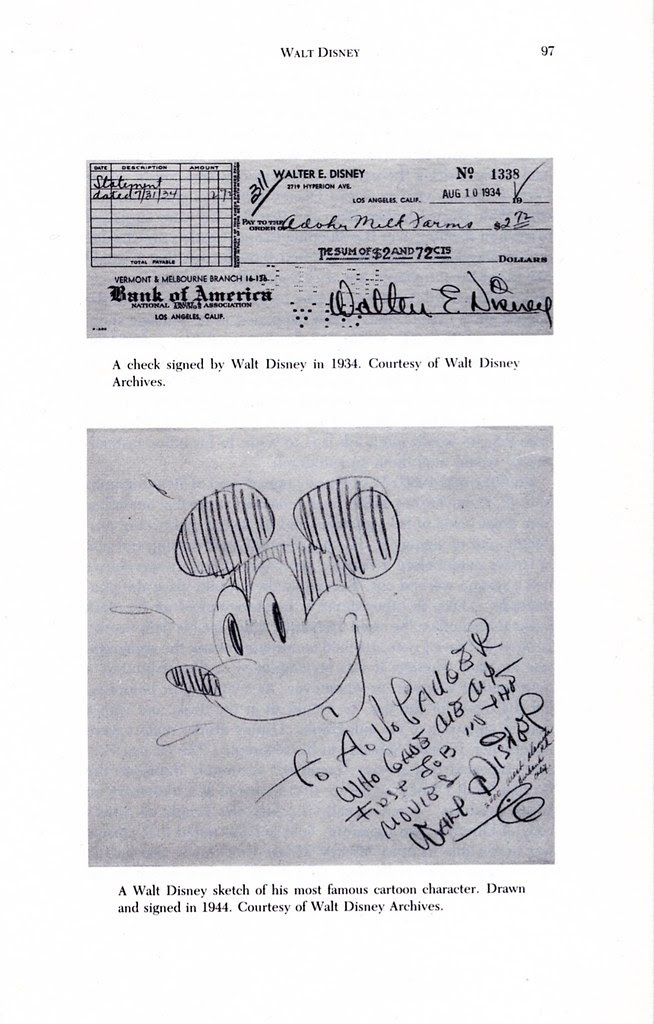 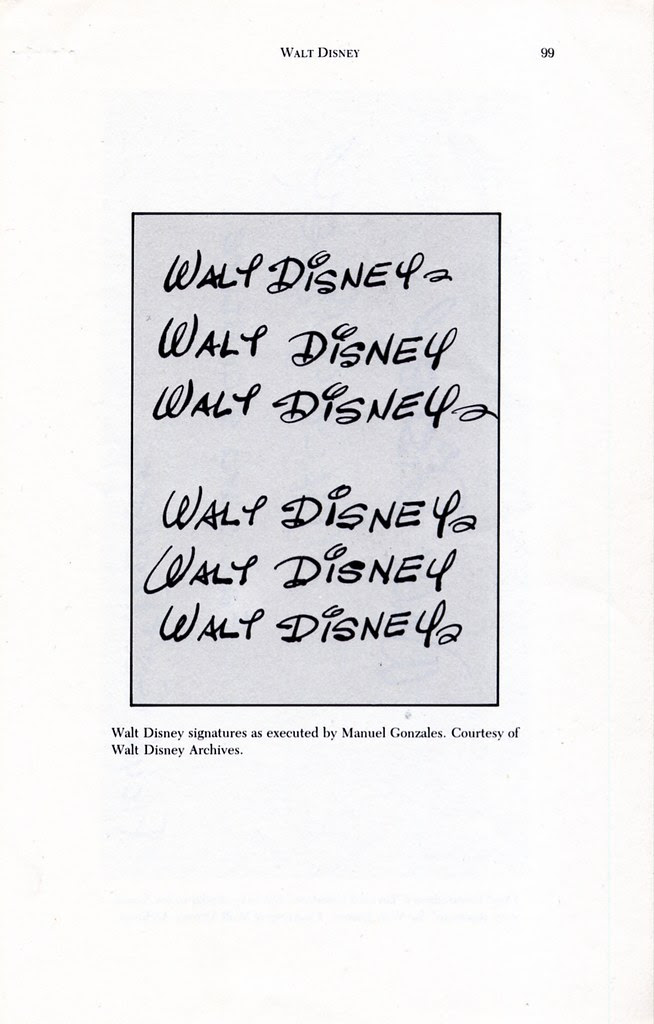 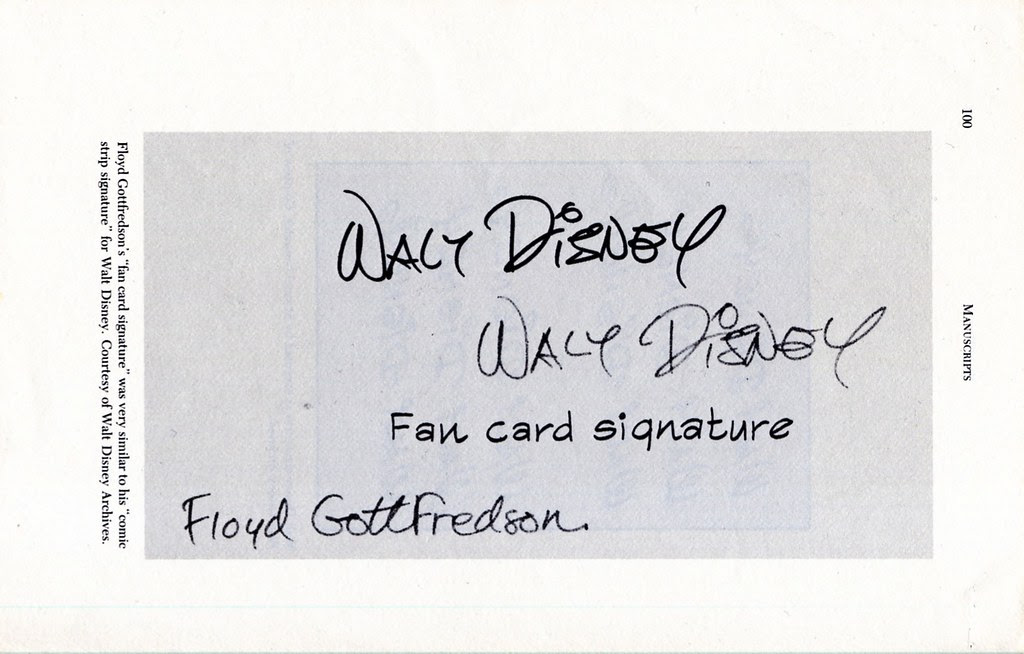 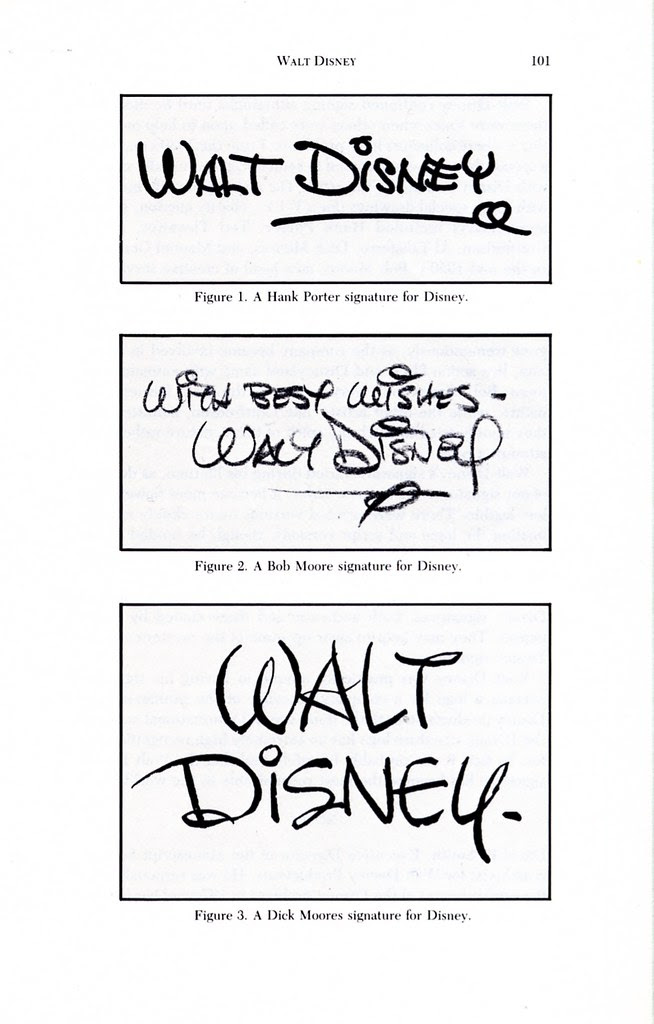 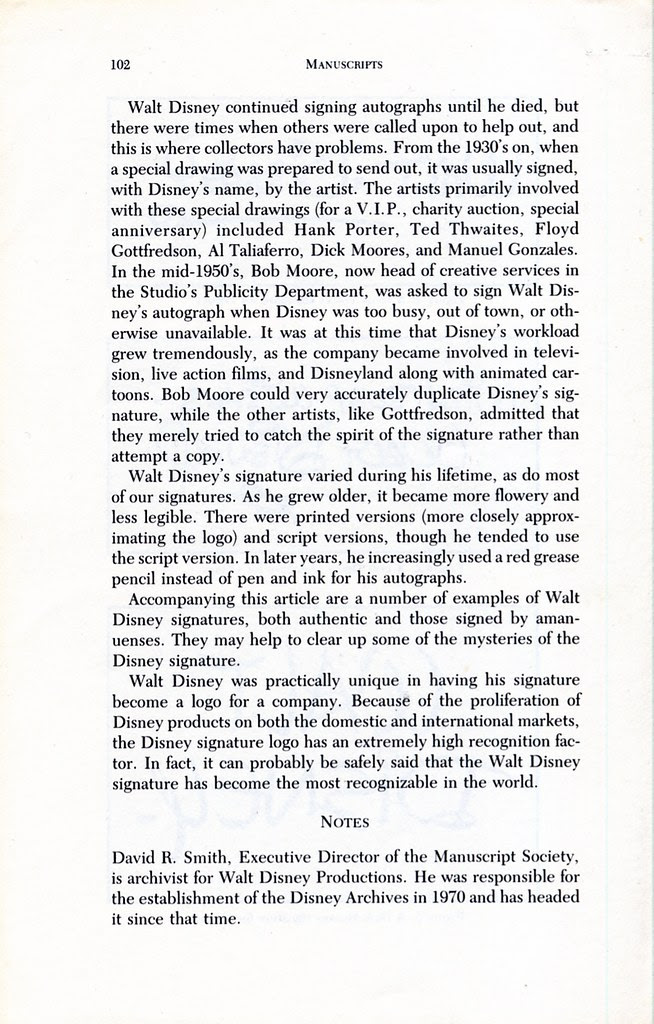 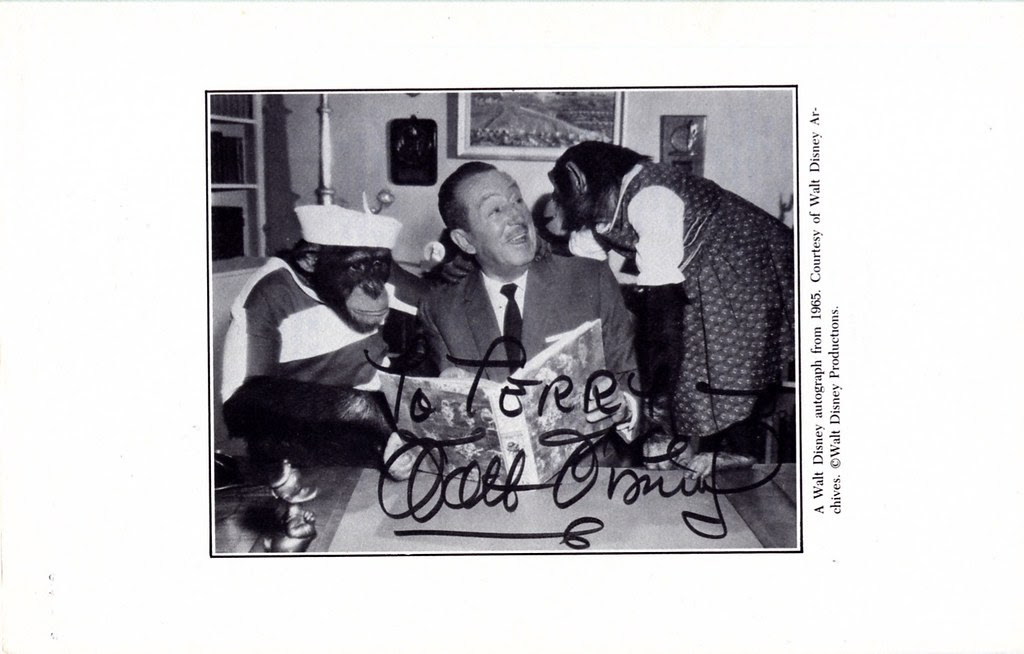