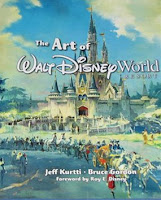 I've recently been  revisiting a wonderful book that has whisked me away from a chilly Spring in South London to the sunshine of Orlando, Florida, and that most extraordinary of places (adored by some, reviled by others) Walt Disney World - Disneyland's younger, but bigger, East Coast sister.

The Art of Walt Disney World by Jeff Kurtti and the late Bruce Gordon is, as the title suggests, a celebration of the art that went into creating the Disney theme park experience that is, essentially, an amalgam of architecture, engineering, landscaping and storytelling.

These artworks fulfilled two purposes: firstly as imaginative explorations of ideas and, later, while the Disney dreams and fantasies were being turned into concrete realities, as a way of introducing the public at large to a new Disney product. 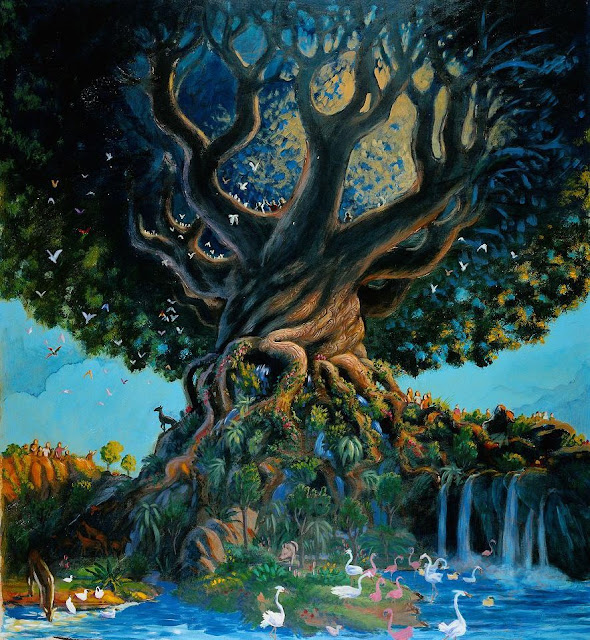 Disney's entertainment complex in Florida now comprises four distinct parks as well as various themed recreation areas and an array of hotels, but when I first went there, in January 1982, there was just the one park called 'The Magic Kingdom' but commonly mis-referred to by tourists as 'Disneyland'. The mistake was understandable, since it was, to all intents and purposes a bigger and more elaborate version of the famous Anaheim original which Disney had opened in 1955. 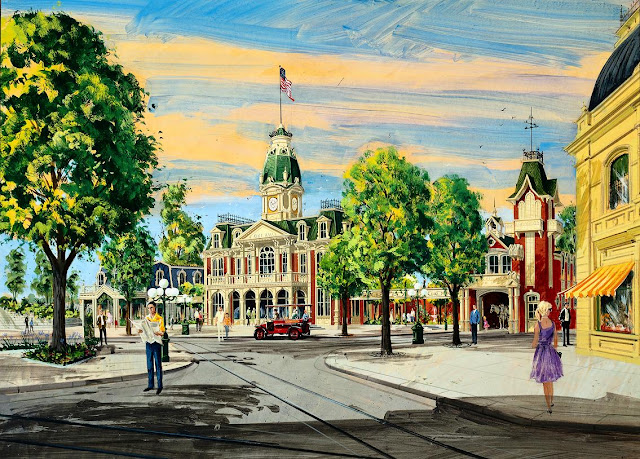 Main Street Town Square with City Hall by Colin Campbell, 1968
The Magic Kingdom
Before visiting a Disney park I admit to having had a somewhat cynical, disparaging (and possibly British) view of this part of the studio's enterprises, but - in the words of Goldsmith - I went to scoff and remained to pray.

The completeness of the creation is remarkable - nothing looks as if it had just been built, but rather as if it had always existed. I remember when Disney opened it's Paris version of Disneyland, I had a heated argument with a French journalist who dismissed the park as being made of cardboard and plastic! Nothing could be further from the truth. You don't have to like the theme park experience, but you can't dismiss it as if it were some gimcrack gewgaw thrown up overnight like a carnival midway.

There is an astonishing attention to detailing in everything - from the decor and dressing of buildings down to litter bins and door furnishings - that is staggering. Pointing out an architectural feature on the top of a building in Disneyland, a journalist once asked Walt Disney "Why bother with all those details that hardly anyone will ever look up high enough to notice?" Disney replied: "Because if they weren't there, people would notice."

The Disney parks are a 3D equivalent of the Disney films in which you have stepped into the screen and where your eye, as the visitor, becomes the camera. 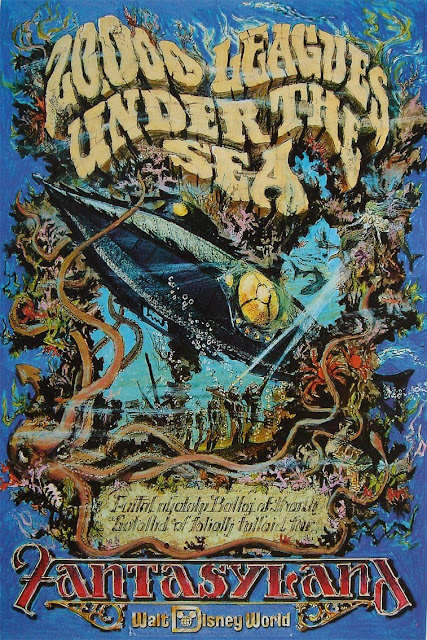 20,000 Leagues Under the Sea
Design for attraction poster - artist/date unknown

What took me to Florida back in 1982 was the unveiling of long-awaited plans for the launch of EPCOT (Experimental Prototype Community of Tomorrow), a futuristic Utopian concept that Walt Disney had begun talking about a few months before his death in 1966 but which had never got beyond the visionary stage and which had severely challenged and perplexed his successors.

Whereas Disney had clearly envisaged - however unfeasible it might have been - a real functioning city, the EPCOT that eventually began to be built was, instead, another theme park albeit one addressing aspects of history, culture, science and technology.

I well remember the first piece of artwork that I saw representing the concept of EPCOT... 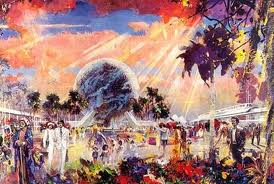 'God rays' streaming from a golden sky dramatically illuminate the Geosphere, Spaceship Earth, that would become EPCOT's iconic image in the same way that Cinderella's Castle in The Magic Kingdom had become the signature image representing Walt Disney World when it first opened in 1971.

Within a few days of arriving, I was talking to the folks at Disney about the possibility of making a BBC TV documentary about EPCOT and was being taken round the sprawling building site and meeting the planners and builders who were engaged in this vast project - digging lagoons, constructing (among many other things) a Chinese temple, a Parisian boulevard, a Canadian chateau and, true to stereotype, a British pub! In addition there were pavilions dedicated to themes of transport, energy, the land and - as yet in the future - the seas... 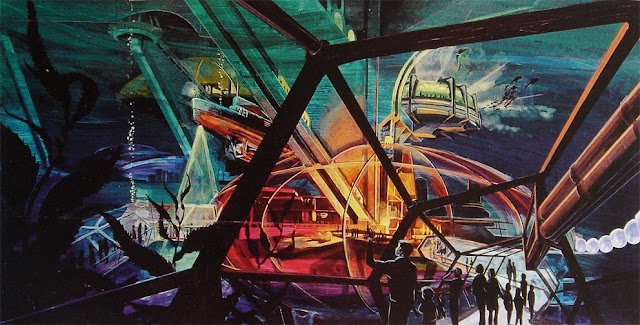 Having studied and written about Disney movies for many years, I was well aware that every animated feature - and, indeed, many of the studio's live-action films - began with story sketches and inspirational artwork that would set the style, tone and look of the film.

I soon discovered that the various locations, settings and attractions in the theme park had begun in a similar way - not, as one might suppose, with architectural blueprints but with pencil and pastel sketches and watercolour and oil paintings by artists, several of whom had been involved with Disney's animation for many years but who had moved from Burbank to Glendale to work for what, at the time, was called WED [for Walter Elias Disney] Imagineering.

Among these 'Imagineers' (a Disney word combining imagination and engineering) were artists like Marc Davis who, as one of Disney's legendary 'Nine Old Men', animated on many of the Disney classics from Bambi onwards and who created much of the look for the celebrated 'Pirates of the Caribbean' attraction - including these skeletons forever contemplating the checkmate on their chessboard... 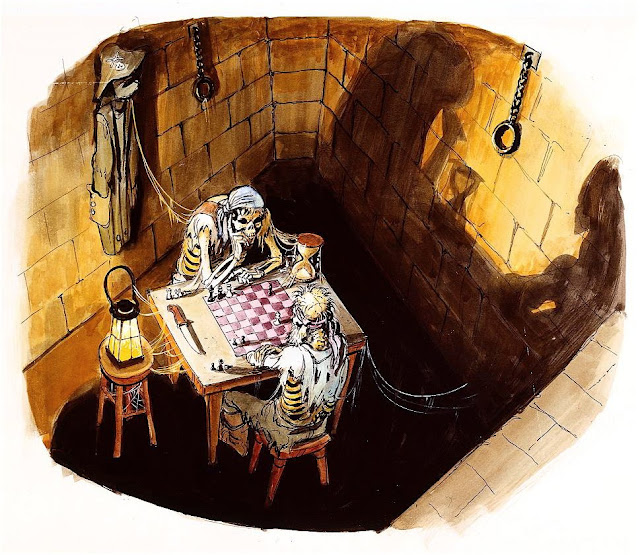 'Perpetual Check' by Marc Davis, 1977The Pirates of the Caribbean - The Magic Kingdom

Marc Davis also contributed to the look of many other attractions in both Disneyland and Walt Disney World including the Magic Kingdom's Rivers of America... 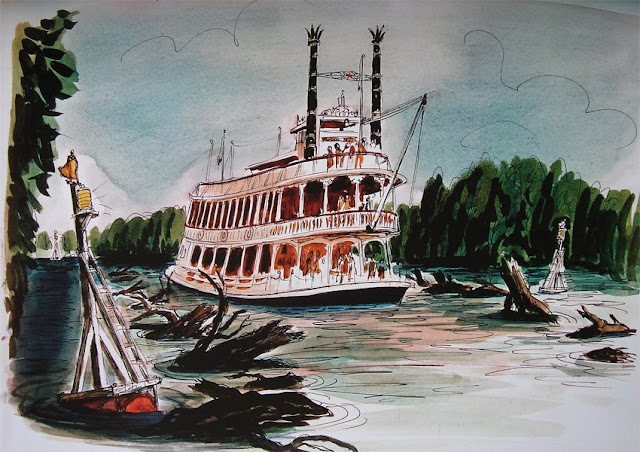 Mary Blair had styled a raft of Disney feature films including Song of the South, Cinderella, Alice in Wonderland and Peter Pan and then went on to design the New York World's Fair/Disneyland boat ride 'It's A Small World'... 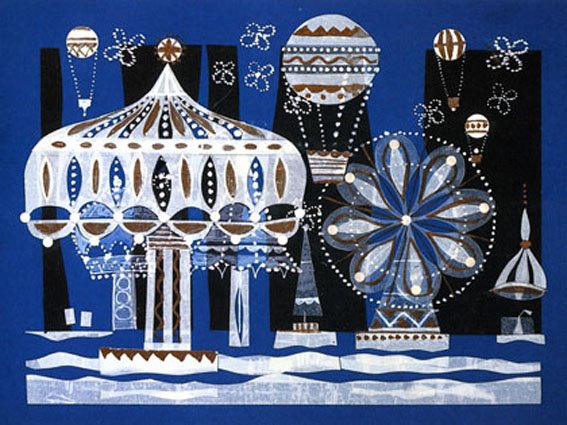 'it's a small world' final scene by Mary Blair, 1970
The Magic Kingdom

...as well as creating a huge mosaic for the Grand Canyon Concourse in Walt Disney World's then state-of-the-art A-frame Contemporary Hotel... 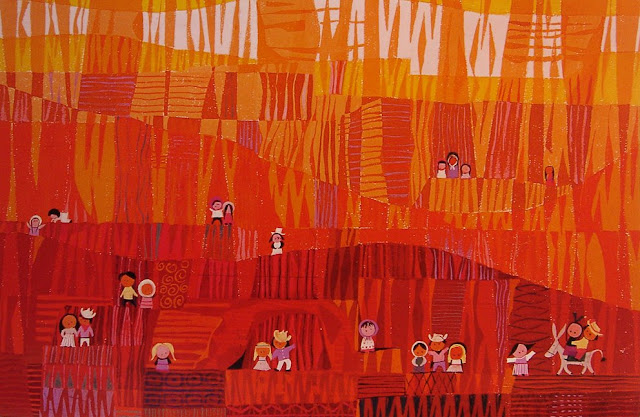 Grand Canyon Concourse Mural detail by Mary Blair, 1969
The Contemporary Hotel
One of the most prolific of these artists was Herbert D Ryman who had begun his career at Metro-Goldwyn-Mayer, working on such classics as David Copperfield and Mutiny on the Bounty. He later worked on Ana and the King of Siam for 20th Century Fox and, in 1938, joined the creative team at Walt Disney Studios where he worked on films including Dumbo and Fantasia.

It was Herb (or Herbie) who created that evocative painting of the Geosphere shown earlier and, years earlier, had come up with the first 'overlook' for Disneyland and an impression of the central Sleeping Beauty's Castle (shown below but not from this book) which Walt used to sell his ideas to backers and sponsors... 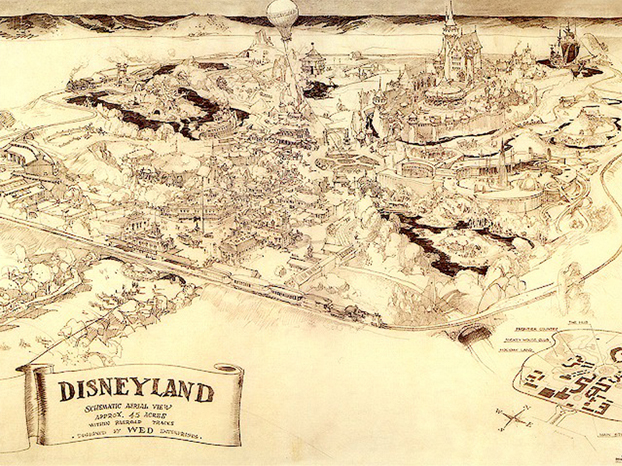 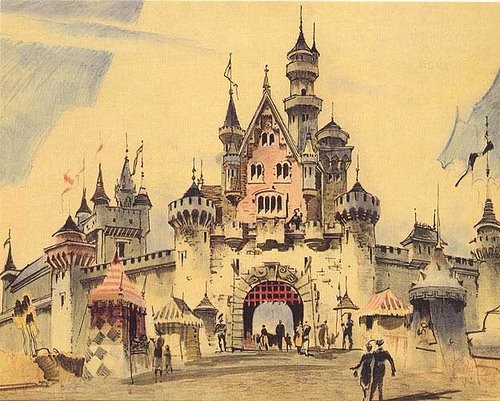 I had the privilege of spending time in Mr Ryman's company, talking about Disney and design and I still find his work endlessly intriguing: the powerfully evocative - yet almost illusory - way in which he painted dreamlike visions such as Walt Disney World's Castle with its turrets and towering spires long before the foundations were even laid - complete, please note, with Cinderella's royal coach, horses and attendants... 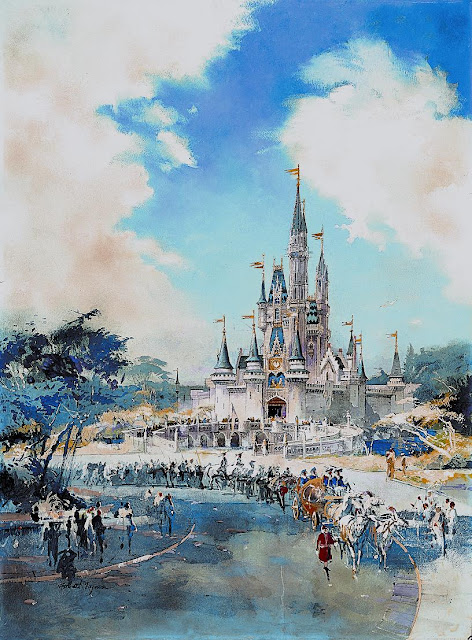 ...or his warmly nostalgic evocation of a long-past age of Americana with a period-costumed population (no tourists in Bermuda shorts and baseball caps here!) including a resident Town Crier... 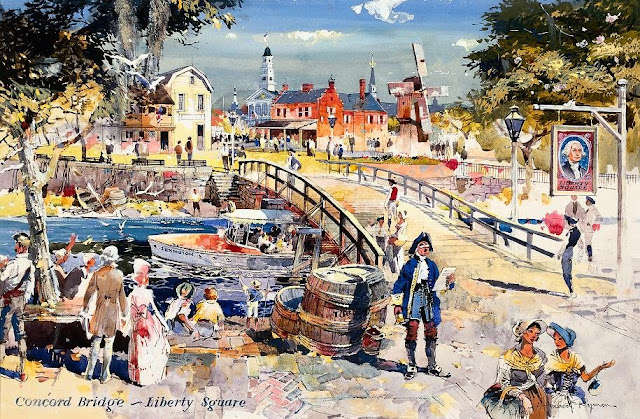 Sometimes Herb Ryman's impressions of places - such as the Equatorial African Pavilion planned for EPCOT's World Showcase but never built - are all that remain of the original dream... 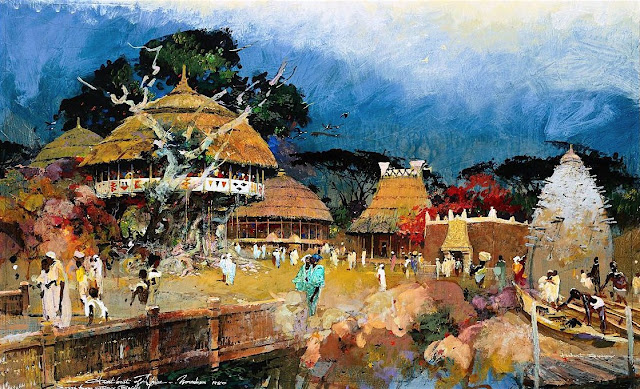 Equatorial Africa Pavilion by Herbert Ryman, 1980
EPCOT - World Showcase
Talking of unrealised dreams, when I was working on my TV documentary, I got to know two of Disney's leading 'Imagineers', Marty Sklar and the late John Hench and following on from a suggestion that I made for a future attraction for the British Pavilion in World Showcase, I was asked to write a treatment for a 'Charles Dickens Ride' that would take visitors (in cars styled like Victorian mail coaches) through a series of tableaux featuring well-known scenes and characters from Dickens' novels: Miss Havisham's Wedding breakfast, Oliver in Fagin's den, Mr Pickwick on the ice in Dingley Dell, Nicholas Nickleby in Dotheboys Hall and, of course, Ebenezer Scrooge and his various spirits...

The project was never seen through to completion, but, as I discovered in The Art of Walt Disney World, various visual interpretations of the idea were made including this scene of Scrooge and the Ghost of Christmas Past by Sam McKim... 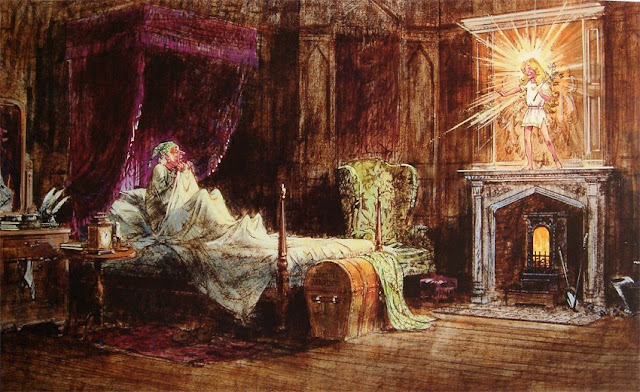 "Are you the spirit, sir, whose coming was foretold to me?"
by Sam McKim, 1984
EPCOT - World Showcase

What fun it would have been to have ridden one's own ride in a Disney theme park! On the night that EPCOT opened, I rode Spaceship Earth with the originator of that ride, Ray Bradbury, giving me an unforgettable personal commentary on the history of human culture from the cave to space exploration. I should dearly have liked to have been able to repay the compliment and take Ray on a tour of my Dickensland!

This is one of the pleasures of Kurtti and Gordon's book: for those who know and love this park there are not only insights into how things became the way they are, but how they might have been and - most beguiling of all - how they never were!

Often, when looking at the inspirational art created for the Disney animated classics, I have had a twinge of regret that some elusive quality captured by the artist has somehow, subsequently, been lost in the process of fixing the images onto film. The same is quite often true of the art of the theme parks, but fortunately, in this handsome volume, much of it is preserved for posterity and for our immediate delight. 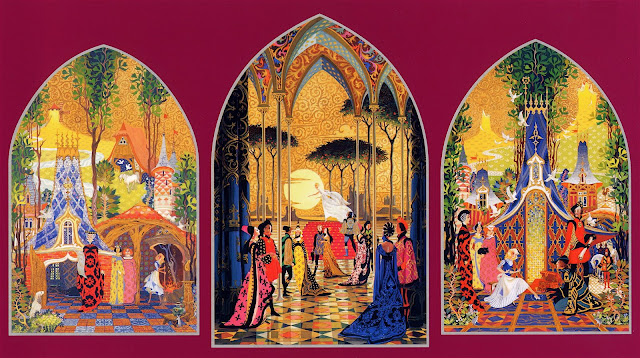 From the pre-digital era... 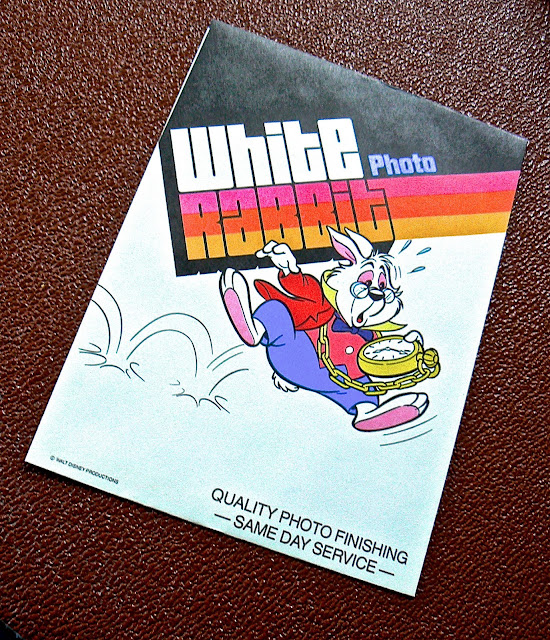 This is the poster that welcomed me to my 1970 screening of Fantasia... 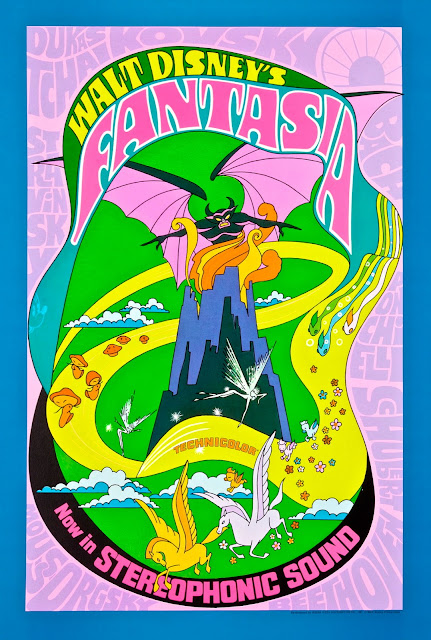