THE LIFE OF WALT

Matthew Parris' guest on this week's edition of Great Lives (BBC Radio 4 today at 16:30, GMT), is the cartoonist and caricaturist Gerald Scarfe who nominates Walt Disney as his chosen life of greatness. 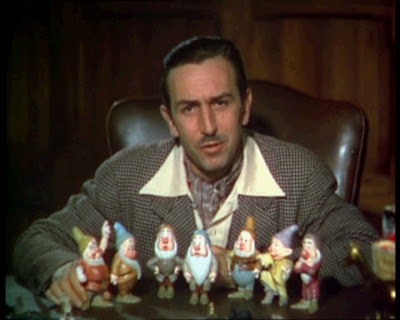 Gerald, who later worked on the Disney Studio's Hercules, fell under the Disney magic when, as a young boy in 1940, he saw Pinocchio. An aspiring artist, he copied the film's characters and says that the villains later influenced his own, often savage, satiric style.

The expert 'witnesses' on the programme are veteran animator, Richard ('Dick') Williams – best-known for his work on the Disney film, Who Framed Roger Rabbit? but also responsible for the wonderful, Oscar-winning animated version of A Christmas Carol) and Yours-Truly.

Dick and I go back a long way: as a young man with ambitions to be an animator I used to visit his studio (then in London's Soho Square) where I met several of animation's elder statesmen: including Ken Harris (responsible for among other cartoon creations, Warner Bros' Wile E Coyote); Grim Natwick who animated both Betty Boop and Snow White; Art Babbitt who gave life to the Three Little Pigs and Snow's nemesis, the Wicked Queen; and Shamus Culhane who animated Miss White's dwarfs and, later Woody Woodpecker.

I had not, however, realised just how far back Dick and I went, until he recalled our first meeting when he had asked me how old I was and I had owned up to being –– fifteen! Where the heck did those intervening forty-five years go...?

You can hear Gerald, Dick and I talking about Walt Disney – exploring the facts and (hopefully) exploding some of the myths – on Great Lives on BBC Radio 4 at 16:30 GMT this afternoon. The programme will be repeated on Friday at 23:00 GMT and can also be heard, after its initial broadcast, via BBC iPlayer.
Posted by Brian Sibley at 00:01 1 comment: