Sixty years ago this year, the first guests passed through the turnstiles of a brand new entertainment venture that would go on to birth that world-wide commercial recreation phenomenon known as 'the theme park'. 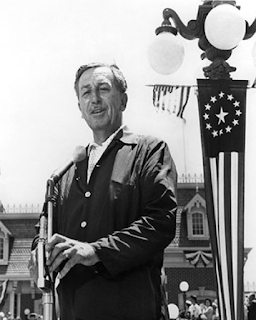 Inaugurating Disneyland on opening day in Anaheim, California, on 17 July, 1955, the man after whom the place was named said:

To all who come to this happy place: Welcome. Disneyland is your land. Here age relives fond memories of the past, and here youth may savour the challenge and promise of the future. Disneyland is dedicated to the ideals, the dreams, and the hard facts that have created America, with the hope that it will be a source of joy and inspiration to all the world.

Thirty years later, in 1985, after one of my many visits to the park, I wrote the article that follows for Animator, a magazine devoted, as the title suggests, to the art (and artists) of animation. My aim was to portray the Disney park as a three-dimensional outworking of the principles that had guided the making of the studio's animated classics.

A further thirty years on, Disneyland has undergone many changes: some of the attractions I mention are now nothing more than a memory and all manner of new amusements are now part of what is officially known in Disneyspeak, 'The Happiest Place on Earth' – including, somewhat surprisingly, attractions based not on any Disney dream but on the Hollywood fantasies of Messrs Spielberg, Lucas and others.

However, whilst Disneyland has seen many changes in sixty years and will doubtless see more – for its founder himself said: "Disneyland will never be completed. It will continue to grow as long as there is imagination left in the world." – some, at least, of my 30th anniversary observations are, I think, still relevant...

Brian Sibley visited Disneyland in 1985, during its thirtieth year celebrations and discovered that the Magic Kingdom was created along the lines of a living animated film… 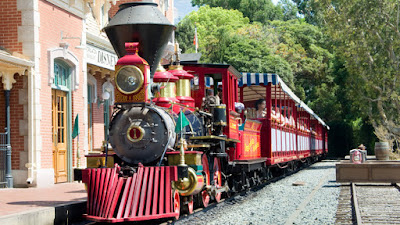 PRE-TITLE SEQUENCE:
The air is filled with a confusion of sounds. The clickerty-clack of turnstiles; the excited chatter of children (ranging from perambulated tots to very senior citizens); the dragon-snort of an approaching steam-engine pistoning its way out of nowhere with an eager clanging of its bell; the murmur of muzak: ‘When you wish upon a star, your dreams come true…

ROLL TITLES: A Day in Disneyland
An aroma of roasting popcorn wafts towards me on the morning breeze. The turnstile clackerty-clicks and, exchanging a friendly wave with Goofy, who is busy sweeping an already spotless forecourt, I pass beneath an arch where a burnished brass plaque bears the simple inscription: ‘Here you leave today – and visit the worlds of yesterday, tomorrow and fantasy.’

Disneyland is thirty years old, but it is as ageless as its ever-smiling host, Mickey Mouse. It looks as new as if it had been run up overnight and its paint were still wet to the touch. It is as solid an institution as Mount Rushmore, yet as insubstantial as fresh-spun candyfloss.

‘Disneyland,’ Walt once remarked, ‘is like Alice stepping through the Looking-Glass. To step through the portals of Disneyland will be like entering another world.’

More than that, it is like stepping into a living cartoon. Disneyland is a three-dimensional outworking of the techniques and illusions of the animator s art.

The animator is unique among film-makers in creating worlds, entire and complete, out of nothing more than graphite, ink and paint. Everything is drawn from scratch: story, characters, settings, sights and sounds, shots and angles – all dreamt up, imagined and then imbued with a semblance of reality.

Disneyland was conceived, designed and built according to the same principle. Everything is placed where and how it is for a reason: to tell a story, to evoke an emotion. Every building, tree, sign-post and flower-bed contribute to the overall atmosphere and total experience of this walk-thru movie. Absolutely nothing is left to chance. 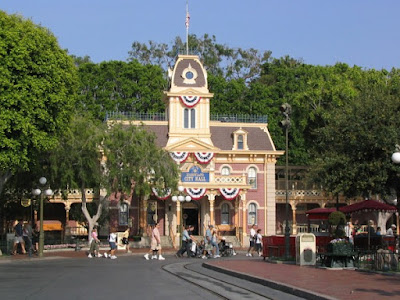 You see it first in Disneyland’s opening sequence: a turn-of-the-century American Town Square and Main Street, constructed to a scale that gives every illusion of authenticity whilst being reassuringly smaller, neater, cleaner and more comfortable than any small American town has ever been outside the work of Norman Rockwell.

Its City Hall, Opera House and Fire Department, its Penny Arcade, Candy Store and Magic Shop each have an individuality of their own, but unlike the riot of warring high street signage we experience in our daily lives, the buildings on Disney's Main Street have a subtle uniformity by which they are blended into a simple background painting against which the props, cast and action can most effectively work for the audience. 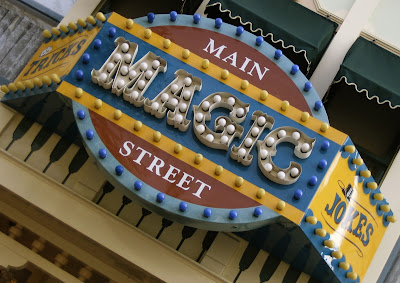 And everywhere, just as in the classic Disney cartoons, there is quite extraordinary attention to detail. It calls to mind that sequence in Pinocchio in which the camera pans around Geppetto’s workshop, stacked and crammed with toys, clocks and novelties that appear on the screen for a mere few seconds and, for many movie-goers, pass unnoticed.

But for the observant there is the reward of discovering the presence of such details. And for the fanatic who views the film again and again, there is always the certainty of finding something not noticed before, something which most people will have overlooked, something hidden there – or so it seems – just for you to find... 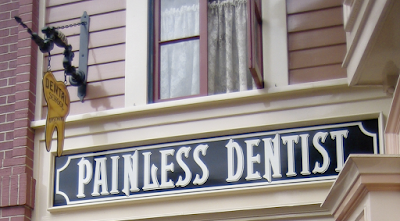 And the purpose of Main Street is the equivalent of the tracking shot in a movie, leading you on to the next scene – or, in this case, to the hub: the centre point of the whole park with its fanciful, blue-tiled, pennant-topped towers and turrets of a ivy-clad, moated, drawbridged castle. This is where the film – or, rather, films – really begin... 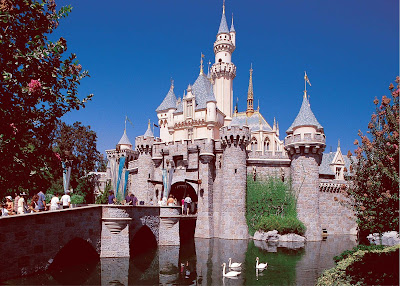 It is named after Sleeping Beauty (the 1959 Disney version of the fairytale was in the works when the park was being built) and it both pulls focus for the visitor as well as offering a choice of moving on into alternative scenes, following different plot lines.

But, for now, let's pass beneath the castle's portcullis into a place that is quintessential Disney animation come alive...

On the rides in Fantasyland, you can clearly see how the Disney ‘Imagineers’ (as Walt called his designers and builders) have utilised the lessons they learnt in animating film. Take, for example, ‘Peter Pan’s Flight’... 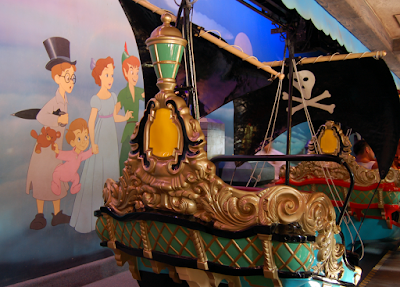 Boarding a model pirate-ship: I fly through the Darling children’s nursery, out of the window and into the night; dipping suddenly I find moonlit London spread out beneath me; then, swinging round and up, I see my destination, the Second Star to the Right; my ship rises above the clouds and then drifts down again towards the Never Land with its Indian encampment and its Mermaid Lagoon.

Every angle from which I view the story of Peter Pan, as it is told here, has been minutely planned; my response to every trick and device has been consciously determined. I am a child once more, sitting in a darkened cinema auditorium while huge, brightly-coloured images dance before my eyes. Yet all the while, I am unaware that anyone else is sharing my experience; oblivious to the fact that my pirate-ship is travelling along  what is essentially a never-ending conveyor-belt of pirate-ships.

Saying goodbye to Peter Pan, I go in search of more illusions. Soon I am falling down Alice’s rabbit-hole, running scared through Snow White’s forest, heading for Pleasure Island with Pinocchio and Jiminy Cricket or hurtling wildly along in one of Mr Toad’s vintage cars through villages and farms, inns and courthouses until I finally collide with an on-coming train and find myself in a comic-strip version of Dante’s Inferno. 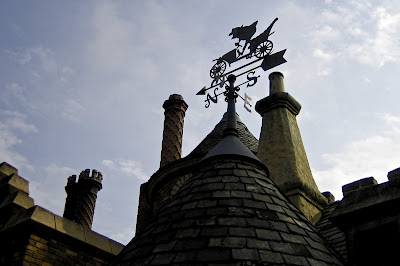 Elsewhere in Disneyland, I am similarly beguiled: among the cavorting ghosts and ghouls of the Haunted Mansion, in the echoing sea caves of Pirates of the Caribbean or peering through a port-hole in the submarine ride (in reality only a few feet below water) at wrecks, sea monsters and the tottering ruins of Atlantis.

Each sequence of the Disneyland movie mixes and dissolves into another, the editing apparently effortless: the twirling pink and purple tea-cups of Fantasyland merging into the retro-futurism of Tomorrowland with its space age modernity and gleaming aluminium.

So skilfully is my disbelief suspended, that I scarcely notice the incongruity of passing from the luxuriant foliage and grass-roofed bazaars bordering Adventureland's Jungle River Ride into the stained-glass and fretted iron-work of New Orleans Square and then on into Frontierland with its stockades, log-cabins, runaway mountain-trains and stern-wheeler riverboats. 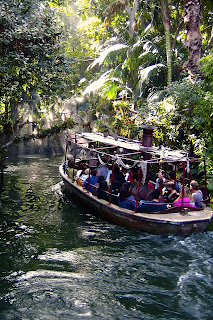 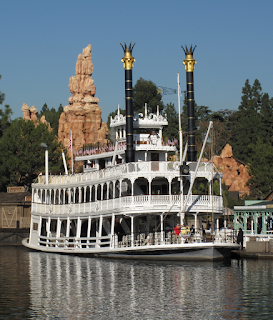 The overall unifying factor, of course, is Disney. Everything in Disneyland is stamped with his personal hallmark; just as, in his films, he took a diversity of subjects and made them completely and uniquely his own. There is nothing odd about encountering a pair of battling dinosaurs in Disneyland only a few hundred yards from the rocket-ride through Space Mountain, because they, like everything else here, are a part of the Disney oeuvre. Touring Disneyland is like wandering through the pages of a Disney filmography, the references are everywhere: Davy Crockett, 20,000 Leagues Under the Sea, Fantasia and Mars and Beyond…

And the there are those attractions that relate to now largely long-forgotten Disney movies such as the Matterhorn Bobsleds that was originally inspired by the live-action adventure, Third Man on the Mountain, or those that were originally created for the 1964/65 New York Wold's Fair – such as the patriotic 'Great Moments with Mr Lincoln' and the cute Utopianism of 'it's a small world after all'. National history and social vision, as seen by Uncle Walt and artfully packaged for inclusion in  this immersive experience where each of us is a movie-camera on the Disneyland sound-stage.

Dusk falls. I pass Monstro the Whale, waiting with open jaws to swallow up the last boat-load of visitors heading for a river ride through the lilliputian world of Storybook Land. 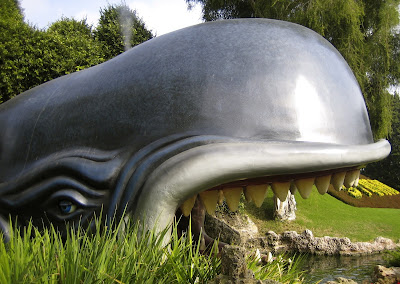 Just time for a quick ride on a flying Dumbo, and then I cross the drawbridge of Sleeping Beauty’s Castle once more and make my way back down Main Street, the heart-line of Disneyland, now a mass of twinkling lights.

Disneyland is the ultimate experiment in the mass-communication of fantasy by a film-maker who so developed the skill and artistry of animation that the biggest movie-screen wasn’t big enough to contain all his ideas, and who took the rules of animation – story-boarding, colour-styling, character design and editing – and used them to build a modern Xanadu.

As the film reaches its finale, I turn and look back to where the castle rises against the night sky and fireworks burst in chrysanthemum explosions. 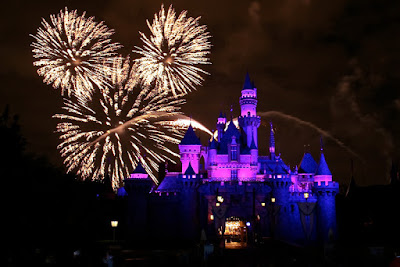 The last few feet of film whizz through the projector and I head, reluctantly, towards the exit. The turnstile gives up a mournful clickerty-clack...

This is a slightly amended version of an article first published in Animator, Issue 15 – Spring 1986
Posted by Brian Sibley at 12:00