Well, the Christmas cards are already pouring in and, shame on us, we haven't done a single one! This is partly due to the pressure of work deadlines coupled with the fact that we are having to prepare to move out of our home of many years occupation. So, apologies to friends for the lack of seasonal greetings this year...

Anyway, the daily influx of images of robins, snowmen and stagecoaches reminded me that for some twenty years my Christmas was given an extra Disney dimension of pleasure through the receipt of personal greetings cards from some of the great Disney animators and artists: Frank Thomas and Ollie Johnson, Marc and Alice Davis, Joe Grant and, the subject of today's post, John Hench. 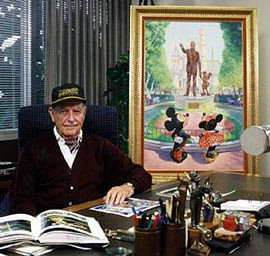 I first met John, legendary artist and Imagineer, early in 1982 when I visited Glendale, California, and Orlando, Florida, to research a BBC TV documentary on Disney's EPCOT which was, finally, under construction at Walt Disney World.

I was thrilled to visit the studios and workshops of Disney Imagineering and quickly made what would prove to be long-lasting friendships with a number of the creative personnel and, in particular, the unit's President, Marty Sklar, and Senior Vice President John Hench.

John was a true 'Renaissance Man' as all who know of his work will agree: his contribution to animated films from Fantasia through to Alice in Wonderland and Peter Pan; his influential work in shaping the Disney theme park experience in Disneyland, Walt Disney World or any of the other parks where his philosophy of entertaining and managing people is still followed; his illustrations to Disney picture books or his 'official portraits' of Mickey Mouse painted for the studio over a number of years.

The opening of EPCOT Center in October 1982, was marked by – amongst many media events – my TV programme, Waltopia. Two months later, I received my first Christmas card from John celebrating the EPCOT achievement... John and I renewed our friendship a few years later, in 1985, when I was back in Los Angeles making the first of several radio series and specials on Disney subjects.

That year, we began exchanging Christmas cards and continued to do so until shortly before his death in 2004 at the age of 95.

Here for your enjoyment are eighteen years of seasonal Hench artwork demonstrating his diverse skills as a draughtsman and his wide-ranging interest in art... John's 1886 design is inspired by the woodcuts of the German Renaissance artist, Hans Weiditz the Younger (1495–c.1537), also known as The Petrarch Master The 'Friends' depicted on either side of John and his wife, Lowry, are (to the left) Salvador Dali (with whom John had worked on the planned Disney film, Destino), Henri Matisse and René Magritte; and (to the right) Pierre Bonnard and the young and old Pablo Picasso. As the inscription in the bottom left hand corner explains, the piece is also a tribute to the 19th Century French caricaturist, Jean Ignace Isidore Gérard, known by the pseudonym, J J Grandville. This card is a tribute to the magic of the 18th Century French conjuror, Jean Eugène Robert-Houdin, who illusions included the magic portfolio from which all kinds of wonders would be produced. John and Lowry's cat is AII: both a paper-size and short for Arabella II, the first Arabella having departed the previous year (hence her appearance in angel-form on the puppet booth in the previous card) A magic lantern tribute to Salvador Dali. The emblematic head is a pastiche of one created by Dali for the Disney film Destino 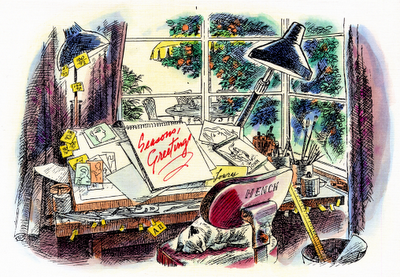 Salvador Dali (this time his museum in Figueres, Catalonia) once again provides the inspiration for a Hench Christmas card Port Lligat was the location of Salvador Dali's home on the Costa Brava. On the reverse John acknowledged receipt of a copy of the book Walt Disney's 'Snow White and the Seven Dwarfs': The Making of the Classic Film which I wrote with Richard Holliss On his 1998 card, John renders the artist and his cat as Magritte-like windows onto a sea-scape A Chaucerian feast for Christmas 1999 An inscription on the reverse explains John's 2000 design... The caption reads: 'A stimulating environment produces neurogenesis!' Neurogenesis (birth of neurons) is the process by which neurons are generated. Most active during pre-natal development, neurogenesis is responsible for populating the growing brain with neurons. In addition to bells, trumpets, candy canes and holly, the imagery on this 2001 card features a Dali lobster-telephone Great cards! Thanks for posting.

Anonymous left a comment that, for some reason, Blogger wouldn't allow me publish. Anyway, here's what Anon wrote:

Not sure who you are, but – if we have really known each other for 25 years – you can't be that anonymous! :)

I accidentally rejected the following comment from Mark Stutz (sorry, Mark!) but this is what he said...


"Thank you for sharing these. They are truly a treasure and an artist legacy.

"I was there (WDI) during a portion of those years and as I recall the only ones who received a Xmas card were his lady friends!!"


Well, I was lucky then! Most of them are hand-coloured...

Back in the WED days and on into the WDI Days, one was very lucky to receive a John Hench Christmas card. You did not have to be one of his favorite female Artists or Colorists, but if John held your work there in high regard you might get a Greeting from him. I'm glad he thought so of my work and gave me the nod on quite a few occasions over the years.

Back in the WED days and on into the WDI Days, one was very lucky to receive a John Hench Christmas card. You did not have to be one of his favorite female Artists or Colorists, but if John held your work there in high regard you might get a Greeting from him. I'm glad he thought so of my work and gave me the nod on quite a few occasions over the years.

I'm sorry I can't personally respond to your comment, but your Blogger profile is hidden. However, thank you for sharing this memory and I'm glad you knew John –– and made it onto his Christmas card list! All good wishes, B