THE FAIREST OF THEM ALL 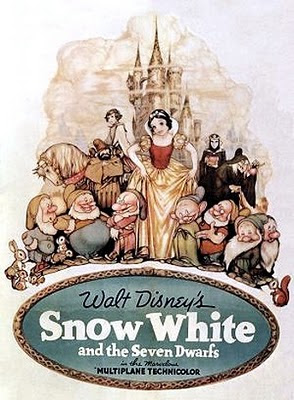 Seventy-three years ago, tonight, radio listeners across America tuned in to hear a very special broadcast, hosted by Don Wilson, that reported on the premiere of Walt Disney's highly-anticipated debut feature-length animated film, Snow White and the Seven Dwarfs.

Rather more recently – a mere twenty-three years ago – to mark the 50th anniversary of that ground-breaking film, I wrote and presented a radio feature for the BBC World Service that sketched the story of the making of a picture that Hollywood had initially dismissed as 'Disney's Folly', but which would become a milestone in the combined histories of animation, American cinema and the Disney corporation.

So, sit back and let me take you to The Carthay Circle Theatre on San Vicente Boulevard on the evening of 21 December 1937: the night Hollywood turned out to see a cartoon!

My programme, which includes contributions from some of those who worked on the film, was called...

THE FAIREST OF THEM ALL
Posted by Brian Sibley at 00:01

Holy Cow Brian! I had a vague recollection that you'd created a Snow White audio program, yet in all my stacks of research clippings and internet links, I somehow missed this one.

Just finished listening to it, and I have to say, Brian, this is an excellent piece! Very thorough and entertaining. Well down as usual. Thanks for posting.

At some point, if it's OK with you, I'd like to re-post it on my site to share with my readers.

Have a wonderful holiday and start to the new year.

Thanks for the compliments! I could make a much better programme today, of course, but it is, I think, still not bad!

And, yes, of course you can post it on your site with pleasure. All we need to do is to find out how to make that possible: I posted it using a facility called Soundcloud... Anyway, let's try to do it.

It looks as if re-posting will be quite simple. All I have to do is click on the "share" link and copy the embed code. It'll go up sometime shortly after the new year...much appreciated.

"Mirror, mirror on the wall",
"Which is the fairest Disney feature of them all?"

"Snow White and the Seven Dwarfs is the fairest of course!"

How very true, Steven! There are certainly Disney films that are more brilliantly accomplished (Pinocchio, Fantasia, Bambi) but SW&T7D is, without question, the fairest...