A highly significant pen-and-ink drawing by Walter Elias Disney will go under the auctioneer's hammer on Wednesday 30 December in the Holabird-Kagin Americana 2011 Grand Final Auction to be held at the Atlantis Casino Resort, 3800 S. Virginia St., Reno, Nevada, 89502, United States. 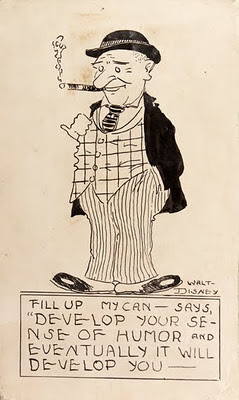 Boldly drawn with great confidence and competence in the style of 'twenties comics, the drawing is a reminder that whilst in his later career, Walt didn't draw the 'cartoons' that carried his name, the young Disney was no slouch at the drawing-board!

Made in c. 1921 and measuring 8" x 4 3/4", the drawing is attached to a blue page with a heading titled 'Miscellaneous' from 'The Girl Graduate's Record Book' that belonged to Walt's sister, Ruth Disney Beecher. The reverse side of this page has "another work of art and a poem" signed Ipkigenia Gilhouse with the date '21, but it is the Disney sketch that has set the opening bid at a cool $17,500.00!

Many thanks to Michael Goldberg for telling me about the sale, though I doubt I'll be able to keep up with the bidding for long!
Posted by Brian Sibley at 13:29

I can spare a fiver Brian, how about we team up?! :P