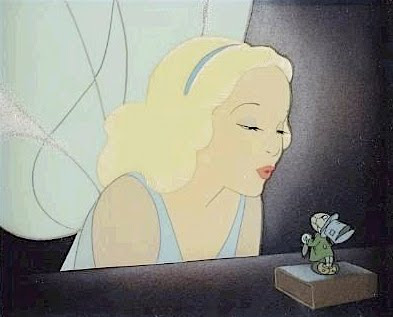 "What is your name?"

"Oh, Cricket's the name. Jiminy Cricket."
One of the inevitable facts about famous books becoming famous movies is that, sometimes, it can be difficult to remember what was in the original and what was added or adapted during the process of Hollywoodisation.

Several Disney films could serve as a case in point: ask anyone to name the Seven Dwarfs and they would manage at least four or five; and yet, those little men had no names in any version of the fairy-tale uncle Uncle Walt retold it in 1937. 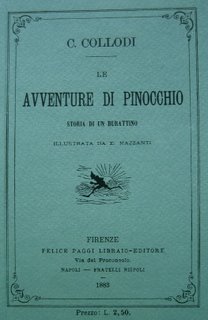 Similarly, the 1940 film, Pinocchio, reminds me that the name of the puppet's 'Official Conscience', Jiminy Cricket, has its own curious history...

When, in 1883, writer 'Carlo Collodi' (real name Carlo Lorenzini) began writing Le Avventure di Pinocchio for an Italian children's newsparer he included a brief encounter between the marionette and a Talking Cricket who, in those days, still didn't have a name.

Pinocchio tells the Cricket that his ambition in life is to "eat, drink, sleep and amuse myself, and to lead a vagabond life from morning to night," and this prompts an outburst of weighty moralising by the Cricket who informs the puppet that: "As a rule, all those who follow that trade end almost always either in a hospital or in prison." This, in turn, leads to an exchange with an extremely ugly outcome... 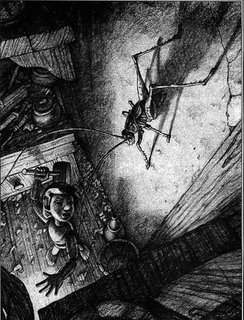 "Take care, you wicked, ill-omened croaker! Woe to you if I fly into a passion!"

"Poor Pinocchio! I really pity you!"

"Because you are a puppet and, what is worse, because you have a wooden head."

At these last words, Pinocchio jumped up in a rage and, snatching a wooden hammer from the bench, he threw it at the Talking-Cricket.

Perhaps he never meant to hit him, but unfortunately it struck him exactly on the head, so that the poor Cricket had scarcely breath to cry "Cri-cri-cri!" and then he remained dried up and flattened against the wall.

Later in the story, the Cricket's ghost comes back from the dead to do some more sermonising, but Walt Disney decided to keep the Cricket alive and to continue his spirited attempts at guiding Pinoke on “the straight and narrow path” throughout the movie. 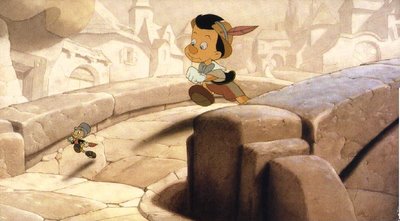 Obviously, such a major character required a name… But the moniker 'Jiminy Cricket' wasn't Disney's invention; it was borrowed from an already everyday expression - dating back to 1848 - denoting puzzlement or surprise: “JIMINY CRICKETS!”

But, why Jiminy Crickets? Well, if you look at the initials of that name -- J. C. -- there's your answer…

Jiminy Crickets (or sometimes Jiminy Christmas) is a euphemistic alternative to swearing by the person whom the British writer and raconteur, Quentin Crisp, used to refer to as "Mister Nazareth"!

It seems likely that the origin of the expression was overlooked by Disney who had already allowed it to be used by the dwarfs in Snow White and the Seven Dwarfs (made three years before Pinocchio) when, on returning from their diamond mine, they discover that their home has been invaded by a princess with a penchant for cooking and cleaning!

Jiminy Crickets is an example of what is called a 'minced oath' - a kind of profanity chosen by those who would rather "mince their words", than risk giving offence… 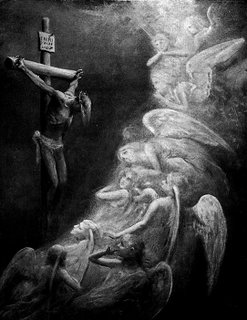 Other examples of 'minced oaths' include such Shakespearian expletives as 'Zounds', short for 'God's wounds' referring to the crucifixion, and 'Gadzooks', from 'God's hooks', or the nails in the cross.

By golly!, By gosh! and By gum! are all handy ways of NOT saying By GOD! And By Jove! is useful if you normally address the deity as Jehovah but want to avoid outright blasphemy.

On the other hand, the commonly used Drat! is a seriously shortened version of God rot it! which actually has a good deal more oomph to it and, in my opinion, really deserves to be reinstated into the language.

It should also be noted that Figs! and Fink! - should you happen to hear them used - are alternatives to the ubiquitous 'F' word - though, I'd guess, pretty much obsolete nowadays…

So, there you are: a bit of movie history and a lesson in etymology all in one!

Godfrey Daniels! What more could you ask?


[Image of Pinocchio and the Cricket by Greg Hildebrandt on Spiderwebart; the Crucifixion is by Dore]

A version of this post first appeared on Brian Sibley: his blog in 2006.
Posted by Brian Sibley at 00:01