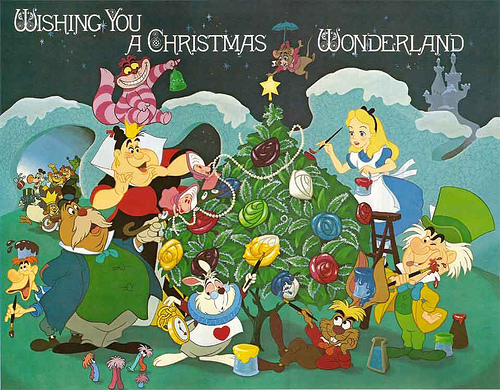 I believe Russell Schroeder is the artist of this work! I even wonder if this was not used - or some other painting by Russell - for the cover of the WDW Co Phone books at one time!

Well, after checking, I must correct my mistakes.
This is definitely by Russell Schroeder (A long time friend, now retired from Disney) for the cover of Eyes & Ears: Russell signed my copy since I was a cast member then and there - you had to know! - I know that Russell's illustrations were also used for the internal WDW phone books and even the ones at the (then) Disney Village outlets.
http://jimattulgeywood.blogspot.fr/

Thanks again. I have always admire Russell's artwork. If you're in touch with him still, please send him my salutations!

Here's one cover by Russell's co-artist colleague Don "Ducky" Williams ...http://1.bp.blogspot.com/_qZmf9l-HC1A/SC28gKN1WcI/AAAAAAAAAlw/L2s81iwPvLs/s400/DonWilliams_Phonebook+0227_1+5_980.jpg
And one by one of their other Partner from Canada, Peter Emslie ...

I have lost contact with Russell when he retired from the Company ...
BUT, the funny thing is that, a few minutes ago, I received Jim Korkis' last opus AND Russell's name is next to yours, Mr Sibley, on the cover!
I love trivia like that!
Jim Korkis is so "prolixe" bookwise! I can't keep up! :-)
Another trivial detail; years ago (I have a cassette tape to prove it!) you recorded a radio show in Florida with Walt Disney World fans. One of them was the President of the World Chapter (She's sadly no longer with us!); I was treasurer of the Club and Greg Ehrbar was member of our merry group. His name is also on the cover of Korkis' HOW TO BE A DISNEY HISTORIAN. :-)
I do believe there's a Disney song that states that It's A Small Wolrd After All, right??!!

I remember the programme well and the day I spent with the fans – there was also a guy, a priest, Fr Ron Aubrey (spelling ?) do you recall him?

Well, I was not part of those Disney fans you met then for the radio show; I got to meet and know Margaret Briggs only a few months after!
I never got to meet the priest either, even though I do know ... Ms Lovett! No, my name is not Todd! ;-)

Years after, back in France and Paris, I did tape another show you had done on, let me remember, female Disney heroïnes, VERY late at night, and with difficulties! Some BBC radio braodcasts are hard to get, even in Paris!

You had inteviewed Diane Disney Miller then, and was I thrilled to get that on cassette tape! Some readers may not know what cassettte tapes are by the way! :-)

The only Ron I remember from that time period is Dreamfinder, Ron Schneider, who was our guest speaker at one of the World Chapter meetings; I wrote an article about him for the Chapter's Newsletter. That goes back to 1989, 1990! My!

Belated birthday wishes to you,Mr Sibley!
(Something dreadful happened on the 14th here in France!)
Coming back to that March thread, the religious person you remember might be; Derric Johnson, who was involved with many musical productions at Walt Disney World like the yearly Candlelight Processional and the Voices of Liberty! http://www.singers.com/songbookimages2/DJohnsonAmerican200.jpg