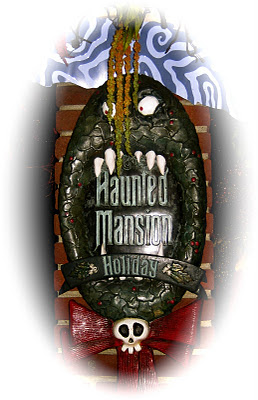 When I first heard, in 2001, that Disneyland's Haunted Mansion was to undergo a holiday season make-over inspired by Tim Burton's The Nightmare Before Christmas, I was appalled!

Old enough to remember that Walt Disney was a person not a corporate logo and to hold an absurdly protective idea about the sacrosanct nature of his uniquely personal park, I thought it was the Mickey Mouse equivalent of blasphemy!

Four years later, when I eventually got to see what had been done to temporarily accommodate Jack Skellington, Sally, Zero, Lock, Shock and Barrel, Oogie Boogie and Sandy Claws among the Mansion's 999 happy haunts, I sat back in my doom buggy and chuckled and chortled at the delightfully self-referential wit with which Disney had pulled off this Halloween/Christmas experiment.

Having reached the end of the ride and encountered the hitch-hiking ghosts, I immediately dashed back round to the front door for another visit...

Here, to celebrate the fact that it is

HALLOWEEN
are a few photographic memories from that experience... I have to admit, I favor the Nightmare version of the Haunted Mansion. I hope that's not Disney sacrilege.

Well, it probably is, Wendy, but I won't tell the Mouse Police!